If TSM can stay together on the calls, play the map in the same strong fashion they have, and don’t get caught in a disastrous teamfight, I don’t see anything changing in this game. IMT want to push the tempo, but even when they’ve done that, their comp hasn’t scaled correctly. This is going to be a tough comeback.


Picks and Bans – IMT start with Graves, then Karma/Jhin, and I really want to see that Karma flexed to Pobelter, but I don’t think we’ll see it. They are heading back into a Maokai matchup, and yup, TSM to Corki/Janna then Kalista/Maokai. They are winning this phase again. Wow. Jhin will pressure them early but falls off terribly in the face of Maokai – the lack of mobility is really going to hurt, and Turtle’s Jhin is already questionable. IMT finish with Rek’Sai/Lissandra and TSM finish with Lee Sin. I think Rek’Sai is Reignover’s best champion due to his map pressure with ult, and the matchup with Lee Sin isn’t bad. If there’s ever a game that Reignover is a step ahead of Svenskeren, it should be this one.


Early Game – We start in Aussie lanes with IMT wanting to match early to push the early lane advantage. They rush out to CS leads, which should transition into some early turrets, but what do they do in later teamfights? At 15:30, IMT send 5 to the top lane and kill both Doublelift and Yellowstar – still, this isn’t a disaster for TSM. It’s just Game 1 all over again. Don’t get down by more than 5k at 20 minutes and you can teamfight your way back, either at an objective, or with a homeguards-empowered TP flank. Svenskeren is going to need to start making plays though. For IMT, it’s a great call – you need to get ahead and get a lead. After burning Hauntzer’s TP on some nonsense, Huni TPs back to this top lane and helps knock down the turret. IMT should be able to get all outers without losing one of their own.

21:15 – Huni has pressured Hauntzer early, but look how he straight tanks the damage from 2 carries. He is already a problem with his ability to absorb damage, once he gets some of his own, it’s going to be a problem. I think Riot needs to rework how this meta favors the tanks so much in lane, every one of these tank champions (Poppy, Maokai) are super strong and basically invite the same builds.

27:30 – IMT, sitting on a 2k gold lead for forever, can’t really get anything for it (notable the mid lane outer). Meanwhile, Svenskeren is getting very comfortable in Reignover’s jungle, and here, they call in Hauntzer for a catch. Wow that Maokai. Reignover and Pobelter go down, bad enough, but then Huni flashes into a crowd and is deleted. Umm… tilt? The classic IMT map control has gone to the wind – all waves are now pushing for TSM, part of why IMT sent Pobelter to the top lane in the first place. Turtle’s Jhin is invisible AGAIN – he’s just not in the right position in the fights. Maokai is almost unstoppable abd the gold is basically even at 20 minutes, a huge problem for IMT.

33:00 – Not sure what Adrian is doing so close to that bush – it’s standard TSM procedure to ambush out of bushes! Pobelter TPs on a ward behind TS mand he Reignover go on a 2-man mission to try and pop Doublelift but Pobelter just doesn’t lock anyone down. Meanwhile, Turtle only gets 7 shots off or so before he is locked down and erased. And most of that is BEFORE Hauntzer gets there! Once he arrives, it’s a disaster and IMT are fleeing in different directions. Hauntzer ends the fight over 50% health! This game is over. IMT still have good pressure in the side lanes and they can split Huni or Pobelter out, but I don’t see them winning any 5v5s.

Wow. Again, I’m not shocked that TSM won. Ok, I am. But I’m absolutely dumbfounded by the way they did it: winning every single position and nearly every single teamfight. IMT have been taking advantage of teamfight mistakes all split long and ran into a tree in TSM and the Maokai top lane. And holy smokes, Svenskeren. This is what I tweeted after the game: 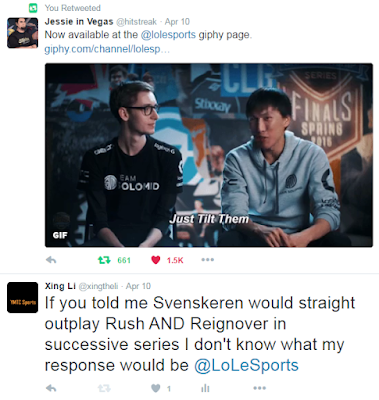 He took buff after buff from from Reignover, dominated the IMT jungle, and did a fantastic job setting up his carries. Sure, it helped that TSM won every pick/ban phase, but still, they have to execute, and they did. Amazing. And we get TSM vs CLG in the Finals! This is going to be a ton of fun.
Posted by Unknown at 12:02 AM