C9’s mission is simple: take away Nidalee from Svenskeren, pick a stronger early-game jungler for Rush, snowball that into ganks, and go back into the standard bloody pick mode that got them here. Oh, and figure out a way to stop Hauntzer because that guy is a monster. I’ve been saying for weeks that he has been TSM’s most consistent player, ranking him ahead of Balls in the top lane.


Picks and Bans – Bans heavily target the jungle: TSM are forced to ban Nidalee on red side and also take out Lee Sin. C9 ban Gragas and Graves and I agree that TSM seem to be baiting Kindred – that ult is still an issue but they showed some capacity to play round it in Game 2. C9 indeed get Kindred and TSM follow with Maokai/Corki, which means C9 may pick Azir for a more teamfight-oriented comp. I’m not so sure the Corki isn’t for Doublelift – he’s been good on the bombardier and I think TSM want Bjergsen to counter Jensen – that’s where they want to win this game. C9 go GP/Braum – very good – and TSM Elise/Janna – also good. C9 go back to Jhin with Orianna – Orianna is one of the best teamfighting picks, she gives you options, and picking blind, she’s relatively safe. I’m an ADC but like playing a little Orianna here and there because she’s so fun. TSM finish with Zed – whoa! If Bjergsen can play around the Kindred ult, this could be fun. Of course, it also requires Sven to gank that lane heavily – a fed Zed is no fun to play against, but falling behind could be an issue. TSM want to win mid lane, C9 everywhere else.
Early Game – Standard lane swap but after the towers fall, Svenskeren ganks mid at 14:00, just how I predicted. I love how early Yelowstar is there, forcing C9 to run and even call the TP from Balls after Bjergsen roams down. That’s a big win for TSM, getting a TP and Flash from Jensen. Svenskeren should be back in a couple minutes. He does at 15:30 with the entire team and Rush dies with assists to everyone. Sven tries again a little later but Jensen jukes the cocoon – but TSM have given Zed his catapult. Lookout.

20:35 – TSM fake a dive mid and go for a very early dragon, especially against a cross-map team like C9. Early Dragons have been the downfall of many leads, but C9 screw it up. They act like they want to steal and they get Doublelift’s package, but as Jatt mentioned, C9 have 2 culls and defense or Orianna – why are they fighting? Hai is alone in the front until he is joined by Rush as they funnel themselves into the pit for no reason at all. That's two easy kills to TSM. Sneaky tries to salvage it with a curtain call but TSM block it smartly. C9 look disjointed.

Good point from Jatt that now that while behind, C9 still don’t have wards while TSM had peppered their red side in anticipation of that dragon play.

23:10 – I had Jensen as the #1 ranked midlaner in NA, but wrote that he, Pobelter, and Bjergsen could basically be ranked in any order. This is why. Bjergsen straight assassinates his counterpart and more importantly, the rest of the team are there AGAIN. TSM take the mid turret a little while later with Bjergsen and Hauntzer unkillable in the side lanes. C9’s only hope is to continue scaling and go for a GP/Orianna teamfight win. The good news? They’ve already done that this season against TSM.

28:00 – This starts well for C9 as Balls out-duels Hauntzer. Sven is a bit late but by showing up, he pulls Jensen to that side while Doublelift roams down from mid to join Bjergsen in the bot lane. I love this – don’t tunnel after kills that are lost, rotate to trade objectives. They find Hai and Sneaky under a very damaged turret and take all three while Svenskeren somehow finalizes a kill on Rush. The whole time, Jensen is running back and forth not doing ANYTHING. TSM have complete map and tempo control and are rolling. This is how you play Zed.

32:20 – TSM pull out all the stops for a kill on Rush and head for Baron. That’s dangerous with GP and Orianna, but Bjergsen smartly circles around the back and assassinates Hai and gets a double kill on Sneaky. That’s Baron. This is the best teamfighting we’ve seen from TSM all year. C9 funnel in one after another, losing Balls, then Rush, then Jensen, but I guess TSM are low enough that they can’t take Baron? 14-4 up in kills and Bjergsen is unstoppable. 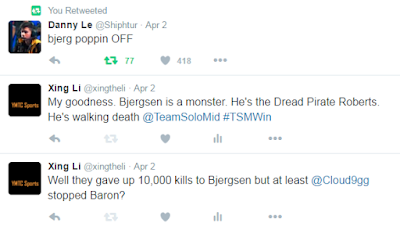 That’s it. TSM have full control of vision to constantly split push and take turrets all over the map. That’s death against Zed. At 37:30 they bait Baron again with Hauntzer waiting to TP with homeguards and C9 walk right into it. They can’t even stay on the lamb’s respite and are shredded for 3 kills. This time, it’s Baron. This time, it’s the game. I’m shocked, not that TSM won, but the virtuosity they showed doing it. TSM made obvious moves at the start and once Zed had a lead on Orianna, it was a snowball. Give Svenskeren lots of credit – he played confidently on a low priority jungle champion and came up with a big game. TSM avoided dying in stupid moments and executed the calls, a huge weakness during the regular season. And holy smokes, Bjergsen on Zed. He played around the Kindred ult perfectly, that last Baron fight the prime example. Classic Bjergsen game which we haven't seen in forever.
Posted by Unknown at 3:30 PM