As promised, analysis of the first round of the #NALCS playoffs! Thanks to LoLeventVODs for the stream and to StreamCastify for the next big thing: video replays! Enjoy!

It’s hard to argue, on a position by position basis, that Cloud 9 are the clearly better team here. That’s the power of the TSM roster. But C9 are the 3 seed by virtue of an entire split playing better together as a team while during the second half, TSM take one step forward and two steps back. I just don’t think TSM will find enough coordinated teamfights to beat C9, and I think C9 are better at cross-map skirmishes via the Rush vs Svenskeren matchup.

That said, TSM have responded beautifully in best of 5 situations and I don’t think this is going to be easy for C9. Remember – TSM were in complete control of the last game they played against C9, and only lost because of several picture-perfect barrel chains from Balls’ Gangplank. With better vision, being behind is a scary scenario for C9. I’m a bit surprised that the desk chose TSM to win the series, but the 10 days with Weldon and the new patch may certainly change the dynamic. This is close and I called it as a 5-game win for C9:

Picks and Bans – Smart bans from TSM who target Rush and Hai – evening the playing field at those positions will be big. I have Hai as the 2nd best Support in NA with Yellowstar not in the top 3, but with the right champion matchup, I’m not sure that Yellowstar isn’t better. C9 first-pick Kindred – I love it. TSM have previously struggled teamfighting around the Kindred ult and C9 will want to fight. TSM respond with Poppy/Azir, which is pretty early to reveal both solo laners (don’t think Yellowstar will play support Poppy). And with so many power picks available, it's a little underwhelming. C9 counter with GP/Braum – this is shaping up very well for the favorites. TSM go with the tried-and-true Kalista/Alistar – this is begging Sneaky to play Jhin, and I’m interested to see how C9 counter the midlane. They go Lucian/TF instead for more early-game pressure. TSM last-pick Elise for Svenskeren. I like the comp from TSM but am concerned that C9 were able to counter so many positions. I think C9 snowball early and win this game.

Early Game – Shenanigans by Hai in the lane swap and he steals the big wolf from Svenskeren AND Hauntzer!

At 25:10, TSM decide to protect the top lane rather than execute the second half of the turret trade. C9 dive with double TP but Doublelift and Yellowstar play it perfectly, trapping Balls under the turret for First Blood to Doublelift’s Kalista (though they give up a kill as well). Look, Sven got First Blood for his team! I think this is a smart decision - C9 want a fast tempo, TSM can be patient with Azir.

C9 head back into the top lane with Rush and the TF ult and Doublelift wisely pulls Yellowstar out of the Braum stun. He then flashes with Yellowstar with him to avoid the gold card. Then, disaster: Hauntzer TP’ed on a ward behind C9. Balls and Jensen match, the gold card catches Poppy and she is deleted. But Hauntzer’s TP has sucked Doublelift AND Yellowstar back in with no ults. They go down and C9 get the turret. This is a big misstep that I don’t know TSM can recover from. C9 are so good at snowballing early leads despite the annoyance of fighting against Bjergsen’s Azir.

I didn’t know it at the time, but this one play wasn’t only the story of the game, but actually the rest of the series. C9 are unstoppable in full skirmish mode and an early lead. But TSM showed something important: they will follow each other’s calls to the end. That’s huge for a team that have been criticized again and again (including by me) for communication, chemistry, and coordination. Yes, the call didn’t work. In fact, it was terrible. And I don’t want to get too deep into the psychology of the players (hence why TSM hired Weldon), this seems kind of like a turning point, for Doublelift and Yellowstar to follow Hauntzer into an impossible situation. Of course, at the time, it was just a disaster.

This game is over, but a few fun fights on the way:
34:00 – TSM try to sneak Rift Herald and get it but Jensen ults behind Doublelift and cards him for a kill. Sven tries to save Yellowstar, can’t, and dies too
40:10 – TSM catch Hai but C9 make the right choice to not tunnel on saving Hai and just rotate elsewhere. I hate when teams tunnel for saves and lose more
42:40 – TSM think they have Balls but an Orange and a Rush (Orange Rush?) turn it for C9. The lead is too big. That’s Baron
44:40 – TSM try to catch them overstaying but Hai is so tanky. Sneaky gets 3, Jensen 1. C9 stay and take the game 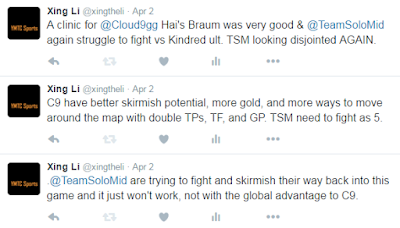 TSM could not afford to fall behind C9 with the comp they picked and that’s what happened. The early TP misplay from Hauntzer created a deficit TSM could not come back from. C9 looked sharp rotating to each location, though some of the catches would have been different had the gold lead been less. I thought all along C9 would win game 1 but expect TSM to bounce back in Game 2.
Posted by Unknown at 9:46 PM