Foreword: So I planned my vacation for #IEM week instead of the pre-playoff off week thinking that Katowice would let me get caught up. Instead, I ended up writing replays of 12 matches that TSM and CLG (mostly TSM) played. I know it was a double-elimination tournament, but I was expecting 8 games from NA teams, 9 at most. But congrats to SoloMid who got the the semis!

That got me behind, but I'm determined to catch up this week. I actually have all the game analysis already done - I write down notes as I watch the games (which is sometimes why my Twitter goes silent) and flesh out the details and edit afterwards. That's why these posts often come in rapid-fire manner. Anyway, no more chat, the first game of the week is TIP vs a returning TSM squad that showed a new gear in Europe.

TSM are coming home after some encouraging, though fruitless results at IEM. I didn’t expect them to take a game off SKT, and they didn’t, but they did show better coordination and tools with the split push. TIP stopped a slide with a clutch victory against NRG last week and need to keep winning to have a shot at playoffs. This should be a #TSMWin off a big mismatch in the top lane.


Picks and Bans – TSM start Lulu and TIP go Graves/Braum which are fine picks. But that leaves Alistar/Kog’Maw for the TSM duo lane. This was my reaction: 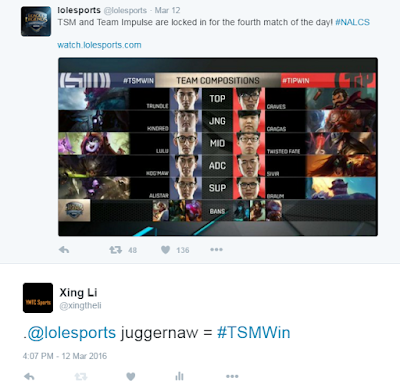 That is a ton of protection for the Kog’Maw. TiP counter with Gragas/Sivir to dive the ADC but TSM get even more teamfight utility in Trundle/Kindred. Question for Svenskeren: can he farm, show in lane, and prioritize the Kindred passive at the same time? Can he save Doublelift if Gragas is there to blow people off the ult? And against a higher-damage TIP comp, can he be the second carry? TIP finish with TF for a very dive-heavy comp that will want to blow up the TSM backline. Despite giving up the juggermaw, if you can take down Doublelift, there’s not a ton of remaining damage. The problem is they are all squishy and if TSM get an angle on them to defeat the Braum shield, they have a lot of ways to extend fights.

Early Game – Hauntzer sneaks the wolf camp at the start of the lane swap by leashing the big wolf around the wall and out of vision. Sneaky. TIP though have a tempo advantage and are smart to shove to the tier 2. TIP take Dragon and Rift Herald but with vision of the team, TSM are free to push long lanes and build CS leads everywhere. Giving Sivir the Rift Herald buff rather than Gragas is interesting – he’s behind and could use more speed but the jungles need to respawn.

20:20 – TIP catch Yellowstar on a face check and call in Pirean’s ult to basically jump over a wall. They had vision but it's just a terrible, terrible ult. The gold card is just a second late allowing Yellowstar to heal before it lands and Svenskeren/Bjergsen turn it. Then TIP almost get a kill on Doublelift who was, of course, pushed up farming. But Feng straight misses his ult which I didn’t even know was possible on Graves.

23:20 – TSM invade the TIP blue buff and are caught by a nice Gragas ult; for some reason Yellowstar runs into the Dragon pit with no flash and dies too. TSM then try to contest Dragon with 3 at 24:00 and are caught by the Braum ult but Gate goes a bit too far (this is the problem of Braum) and Doublelift melts him. Wild growth on Hauntzer nets a 2 for 2 trade but TIP are all low and forced to retreat while Bjergsen takes down the mid lane outer. TSM trade kills again a couple minutes later, getting Doublelift fed and take down mid lane tier 2. Impulse have a couple extra kills but are slow rotating to objectives since they’ve lost their jungle and need to walk through cautiously.

31:00 – Sven is caught backing from an invade, but TIP put a bunch of resources into him. That forces Hauntzer to walk up the river in case they engage Doublelift, and Trundle is caught as well. But TIP can only turn to Dragon with no waves pushing. Hauntzer had the bot pushed super far and Bjergsen is still in the top lane. TIP are forced to recall to protect the turret and are unable to do so against the 5 man TSM squad, ceding two kills. The bot lane wave has crashed into the inhibitor turret, allowing TSM to take a clean Baron.

The game is basically over at this point. TIP put on a spirited defense of their top lane turret (Hauntzer had no TP so couldn’t split) but TSM take it eventually and that’s too much map pressure for TIP to recover. Kog’Maw ended the inhibitor siege 6/2/3 for 100% kill participation and a bunch of items. TIP just had no answer for him, especially with a Trundle that steals tank stats and Lulu to shield him. This was a pick/ban loss. They never had pressure with TF, using Pirean mainly for area picks rather than cross-map plays (Doublelift even mentioned after the game how bad TIP’s wave management was). For TSM, it was a pretty good game of protecting Doublelift, which they’ve struggled with. If they can play so well on a macro level, combined with the split strategy they revealed at IEM, they have a shot going into the playoffs.