This game was nuts. This is a selection from my post-match Twitter feed: 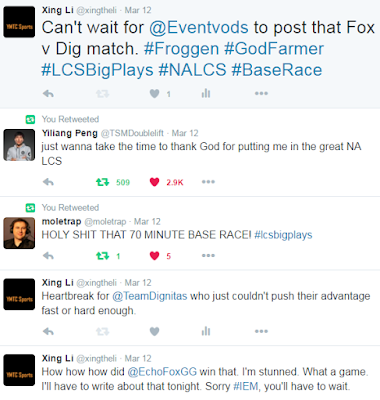 In fact, I’m not even going to do much analysis, not least because the game lasted over an hour and featured a dozen crucial moments/teamfights. Just watch it yourself. I’ll highlight key moments and let you bask in the glory that is the wacky, wild #NALCS.


Picks and Bans – FOX first-pick Nidalee with Corki still on the table, showing her value in this meta. DIG Corki along with Braum and follow with Elise/Jhin; we haven’t seen Apollo’s Jhin, but Elise is one of the few champions Kirei has been good on. However this allows FOX to get Alistar/Kalista and GP/Nautilus – Phreak and Kobe talked about how this was basically an entire lineup of top-tier power picks for FOX, and I agree. DIG though have some advantages – last-pick Poppy should hold her own in the top lane, Jhin's range is favorable into Kalista early, same for Corki into GP. If DIG can prevent Hard from making plays all over the map in support of their lanes, they should have an advantage through 15 minutes.
Analysis – I will keep this short. DIG dominated each phase of the game by winning every lane (in standard lanes). Kirei 3-buffed Hard and turned that into kills for his team all over the map, making up for the huge CS deficit. DIG rotated faster and took down turret after turret while FOX were stuck farming passively. BillyBoss, a weak point, played well into kfo and had Nautilus shoved constantly (a difficult task). The game slogged into a long laning phase, which at the time made sense for both teams: DIG continue push lane advantages while FOX wanted to survive and scale GP. DIG were able to turn their map control into multiple objectives and multiple win conditions… only to lose it all by not pushing when they should have, letting off the gas, and allowing FOX to backdoor the nexus. That was it. They should have won at least 5 different times. But just like this whole season has gone for FOX, they’ve found a way.

23:30 – Hard is not safe in his jungle
26:50 – Great TP + Ult from BillyBoss. Really impressing on Poppy
47:50 – Hard steals Drake but FOX are trapped, split, and Apollo gets an easy double kill off nice damage juggling and dragon manipulation. Baron for DIG
54:30 – Another good ult from BillyBoss removes Froggen so DIG can burn down Nautilus. DIG get 4th Dragon and catch Big again in no man’s land.
58:50 – DIG catch FOX recalling and grab another Baron with BillyBoss playing the bouncer on the outside. Why are they still 1-3-1 split?
1:01:10 – DIG get Dragon 5 followed by a messy disengage (the ward Kobe was indignant about was actually placed after Big was already dead)
1:03:40 – Big dies again, DIG get two inhibs and should end… but don’t… because Dignitas (get ready for more of this)
1:05:00 – Wait for it… and Froggen gets the world CS record... with a kill on Kirei! Why are DIG still split pushing???
1:06:25 – Look at Kalista on the map. WHY? They need to clear under turrets! Goodbye Keith, goodbye Hard, goodbye game. But instead of pushing in the top lane wave, DIG commit 4 to Baron when they only probably needed 3 (maybe even 2).
1:07:30 – Really, Dragon 5 again? FOX are all alive now. Why are DIG still split pushing!?!?
1:08:45 – This may be the worst Baron/Dragon 5 empowered Corki siege I’ve ever seen, and I suck at this game. What is Shiphtur doing?!
1:09:35 – Instead of sieging the top lane inhib turret, DIG dive, because DIG. Froggen and Keith pop GAs and stall the game longer. 60 minutes
1:10:45 – FOX finally take the DIG mid lane outer
1:12:20 – DIG finally push in… and then retreat. WHY IS POPPY STILL SPLIT PUSHING!?!?!?
1:13:30 – Dragon number 5 number 3. They head for Baron. Go Dignitas
1:15:10 – DIG siege top again with all members and both buffs. Surely this is the game? I don’t even have words for this team fight. Kirei on the front line, BillyBoss diving on the team, madness. FOX go 4-1 with over 1 minute death timers. Surely this is the game?
1:16:35 – BillyBoss channels a TP… what is he doing!? He can’t race 4 members of FOX by himself? They’ll just burn through the nexus turrets! He wisely cancels and all of DIG come alive as FOX try to take down turrets. They kill Froggen, they kill kfo, and head for the FOX base
1:17:30 – But FOX have no interest in defending their base! Only Kirei is around! Billy and Apollo both channel recalls to stop Keith and Big but Apollo cancels his! What!? WTF? Keith goes down but Hard is back! Hard goes down but Big WINS THE GAME!!!!!! 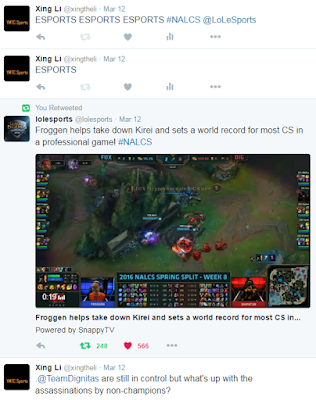