Picks and Bans – Dignitas ban Nautilus from Lourlo… ok, but can BillyBoss capitalize? DIG first-pick Corki and then Trundle/Sivir after TL grab Poppy/Elise for comfort. Curious Elise prioritization, though Dardoch is very good at power farming and doing damage on the spider. TL next pick Lulu/Janna so they can counter the ADC, and DIG follow with Udyr/Bard. They are going to have to stay very safe in lanes to let Udyr do his thing (Jatt noticed Kirei has only one Udyr game in solo queue…). It’s not a crazy pick, but DIG haven’t really shown much prowess split pushing and TL have a ton of disengage and kite. Piglet picks Vayne into Sivir which is totally fine.


Early Game – Standard lanes. Not much happens until a TL dive at 16:30 that is seen by DIG (Dardoch sat on a green trinket) and at first I thought it was a misplay from DIG, but Billy’s TP was down. Then Matt dies for no reason (just stayed in turret range doing NOTHING) and Lourlo TPs in VERY late. That allows Shiphtur to walk down and salvage a 2:3 for this team, saving the turret. The whole time, Billy has been in the top lane alone, building a CS advantage, and TL are out of TPs. TL salvage the early game by diving Billy again and again, and in a matchup of inexperienced top laners, Lourlo’s Poppy comes out a bit ahead with the help of his jungler.

22:10 – Just unlucky for TL. KiWi catches Piglet recalling a split second later than Matt and that’s a dead Vayne. Even worse, TL burn two TPs before realizing their carry would die regardless and cancelling both. DIG have much better waveclear and turn this into the bot lane turret. If they can take the mid laner outer down by 18 minutes or so in game time, it will set them up well. They are still losing the top lane though and have to be careful of not letting Piglet get too big. They end up trading their own bot lane for the TL top, this should make it easier to take that mid turret soon.

26:25 – This play actually starts off-map with Piglet using the Vayne ult and all-inning Apollo with the Vayne ult. This is NOT what Dignitas want. They have a long top lane and an inferior teamfight comp and the Bard ult just misses everyone. TL almost get a 3 for nothing but it’s only KiWiKiD caught this time. This is why I picked Liquid – they are building advantages in all lanes except mid. Shiphtur has been working on the mid turret forever but just isn’t able to get it down.

DIG’s inability to siege the mid turret with Corki and the Rift Herald buff at 28:30 was a microcosm of the rest of the game. After taking a turret advantage and staying close in kills, DIG gave up pressure all over the map and let TL run them around. They same mistakes we saw in Week 8 in terms of letting of the gas manifested again in this match. Kirei’s Udyr was invisible.

30:50 – TL start the Baron but the Bard ult from KiWiKiD comes much too late. TL get Nash and somehow get out with all 5 and 2 kills. I’m not sure what DIG were hoping for. They should have frozen the Baron around 1/3 health and use the time to burn down a squishy. Instead, TL get even more map pressure and take 2 turrets. The game is basically over. Piglet gets kill after kill on Trundle and DIG are forced to defend as 5, not what their team is built to do. But that doesn’t mean the game isn’t still crazy! 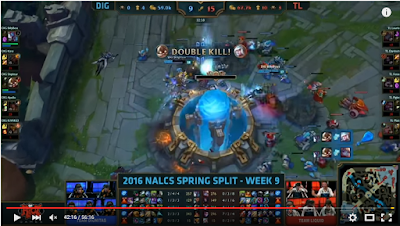 And then Fenix TPs the nexus. What is with Dignitas and these games?
Posted by Unknown at 1:06 PM