This turned out to be the best game of the week. Maybe one of the best this split, a great exhibition of playstyles and champions. Team SoloMid and Cloud 9 Gaming both performed at a high level the last couple weeks. For C9, Hai's shot calling has been a boon while TSM have benefited from staying together as a team. Before the match, I though C9 would win based on the balance across their lineup; I also thought Hai and Sneaky will would the duo lane as Doublelift has mixed great performances with disappointing ones. Alert: this game was a doozy and this post will be a bit long...

Picks and Bans – I loved this draft. GP vs Kog’Maw is not only a fun matchup of wildly different styles, but NA players need to start excelling on champions like these when they’re regularly seen in other regions. The late-game scaling will be incredible from both sides, and whichever carry stays safer will likely win the game. As for the supporting champs (and they are all supports in this game), I loves TSM getting Gragas but worry about their lack of poke – their last picks were LeBlanc/Poppy for Bjergsen/Hauntzer, but I would have rather seen one of Corki/Graves for some range to blow up barrels. Poppy can do it, and she has good engage, but she doesn’t have many exit skills (and the recent nerfs seem to have hurt). For C9, Kalista is fine, but a longer-range champ may be better suited to keep Kog’Maw contained in lane. Still, it’s Kalista.


Both of these teams want a long lane phase, and active ganking from Svenskeren (First Blood for Doublelift at 19:00) and Rush gave gold to the carries. Balls consistently shoved Hauntzer to his turret and Doublelift held his ground against Sneaky. 24:50 appears to be a successful countergank by Svenskeren as he blocks the gold card, but Hauntzer started below 50% health, gets caught in the GP ult, and is killed by Herald-buffed casters. I like this fight from both sides – it’s lost for TSM but both teams showed strong coordination and teamfight mechanics.

28:40 – Nice gank by Rush is a clean kill onto Bjergsen. Bjergsen was under turret with Sven down bot but lunged onto Jensen and was killed before he was able to shift back. A few seconds later, TSM see C9 invading the blue side jungle and head for Dragon but C9 start pinging on them (see where the pings are before the replay at 29:09): 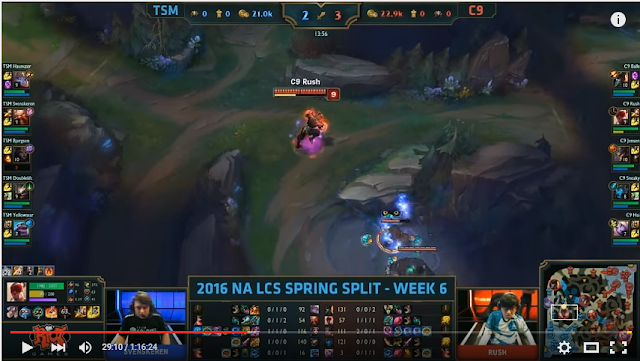 TSM are split and lose 3 for 0. It would have been a lost fight anyway but Doublelift, Yellowstar, and Sven do not coordinate targets and fail to return even a single kill. Instead of following Braum and Gragas, Doublelift goes the other way on Jensen and Balls and dies quickly. C9 are in full control – Kalista is keeping up with Kog’Maw and GP has shut down Poppy. Hauntzer has been TSM’s most consistent player the whole split but has been absent in this one. Their winning of the lanes allow them to take top and bot outers a few minutes later.

35:30 – Rush is caught and almost goes down but is saved by the GP ult and Jensen and almost takes out Hauntzer. On the other side, Yellowstar freezes Sneaky and he is melted. Both teams begin to disengage but Doublelift goes back in solo and snipes Hai from long range. 3/1/0 on Kog’Maw, 1/0/4 for GP. This is going to be fun.

40:40 – After some skirmishes around the midlane, TSM take a dragon that C9 cannot contest. C9 should head back to the side lanes but instead they call down Cannon Barrage and Rush goes in only to blown away by Gragas, CC’ed, and killed. Crucially, nobody touched Doublelift who picks up a Double Kill and is FED. TSM call Baron and take out Rush on the way. With the Buff, TSM play patiently, laying vision and giving Hauntzer time alone to knock down turrets in the top lane.

43:55 – After this sequence, it’s hard to figure out a win condition for C9. Certainly a big barrel chain teamfight win from Balls, right? Right?? They strangely leave Yellowstar alone to get caught by TF ult on the way out, but that should be okay as they trade back for Rush’s life. TSM easily knock down the mid and bot lane tier 2s and C9 have lost the map. TSM should head bottom and that’s what they do. C9 almost catch Doublelift but lose Jensen instead. Balls has a few items to go before he can truly one-shot the team.

49:30 – TSM ambush Rush in his jungle and call Baron again. Hauntzer does a good job fending of Balls and C9 lose Jensen, but do enough damage to stop Baron. Supers have taken down a C9 nexus turret though, giving TSM more options. I feel like TSM should forget about Baron and instead try to take down another inhibitor – they have strong teamfight but the Baron pit can be dangerous against GP. With the turret lead, C9’s split push is not a threat; let them decide if they want to trade or race.

52:00 – TSM have lost Bjergsen but have super streaming into the base. C9 put up a valiant defense but lose the turret anyway. Again, TSM have the teamfight comp, but the only way they lose this game is by losing a teamfight to GP. This would be a lot easier if they had even one split push threat on their team. As it were, they should still try to make C9 run around the map. Balls is almost full on items.

54:50 – TSM are knocking down the mid inhibitor but are wisely wary of C9’s catch potential. Then they find out why. Hai freezes Doublelift, Balls gets his ultimate and a barrel while Rush goes in. TSM are caught in the Cannon Barrage and it's an Ace for C9! They didn’t even lose the inhibitor. The death timers are getting long but TSM should come up fast enough. Balls and Rush do get the Baron though. C9 now have their inhibitors up and at this stage of the game, the TSM lead doesn’t mean much. One bad fight and C9 can push all the way through to their base.

57:30 – TSM spend a lot of time grouped in this bush for the ambush. They really want a teamfight win but we just saw how dangerous those can be. They waste all their cooldowns on Rush (replay after the game showed C9 had prepared for the ambush) and can’t take him down fast enough, giving Balls time to set up and he wipes the floor. Bjergsen, with no range, does almost nothing in the fight – he went big on Jensen who calmly activated Zhonya’s. Then in a fit of lunacy Bjergsen gets out alive and almost gets a 1v2 double kill on Rush and Hai. C9 get the Ace and Balls takes down the middle inhib.

1:01:00 – C9 now have all the cards and zone TSM out of another teamfight. TSM just lost two straight teamfights – the first objective-based, the second on their engagement. They have no hope when C9 are the instigators. Another Ace means the game for C9. Wow. What a game.

Lots of takeaways from this game. For C9 – their teamfight execution was flat better than TSM’s. For the most part, they were coordinated with Rush going in and the rest of the team following immediately. Great shot-calling by Hai and execution behind Rush. However, they have to be concerned with their inability to shut down Doublelift in the early game – they should have had some tools with the global abilities and split push potential, but this was a lost game for a long time. For TSM – they’ve struggled keeping Doublelift safe before and have to be encouraged by how fed he got on Kog’Maw. But, and the analysts mentioned this, they weren’t able to peel for him adequately in the late game. Kog’Maw is an important champion to pick up in this split though and for much of the game, they were in control. I thought they needed one more ranged champ to poke and I still think I’m right. They wanted Poppy to keep people off Doublelift, but I like Corki into TF. Then again, who am I to challenge their comp?
Posted by Unknown at 11:25 AM