Last of the Week 2 #NALCS analysis before we dive into Week 3. I'm especially excited for today's NRG v. TSM and NRG v. Impulse matches. Speaking of TSM, I wanted to take another look at Team SoloMid and Team Dignitas. On paper, this should be a win for TSM, but they have made things harder on themselves with some questionable calls and coordination.

Pick/Ban: Analysts and casters talked about banning Elise from Kirei and TSM did that. There are still powerful junglers left up, and I expected him to take what I conceive to be a “safe” jungler in Rek’Sai and he did. I like what TSM did with the start of their draft, taking three power picks that are also super flexible – you can play all of Graves, Corki, and Poppy in different places, though I’d be surprised if Poppy didn’t end up in the top and Graves in the jungle. Hauntzer’s Poppy was pretty good in their game vs. IMT. DIG went with a more teamfight-oriented comp with good peel for their long-range carries; this comp will test their ability to position for engages. But with how fast-paced this meta can be, they will need to play smart through the midgame to avoid TSM rolling them with that power. This would have been a good comp for last season's patch, where fights around Dragon were more important, but I think it's going to be harder for DIG to find a good fight unless Kirei goes super aggressive. I may be biased from what I've seen from Immortals, but it looks like the power picks are the way to go.


TSM have such ridiculous crowd support.

25:15 – Look where top lane is. After taking the tower, DIG couldn’t get the wave to bounce and BillyBoss was consistently pushed up. He did have vision, but he didn’t account for the damage Hauntzer could do on Poppy. Hauntzer was the MVP for TSM in their last game (I gave him TSM’s only A) and Bjergsen’s proactive roam from mid seals Gnar’s fate. Apollo had just recalled so DIG can’t even punish the bot lane in response.

27:05 – 5v5 in the bot lane started by Yellowstar going in very deep. The casters said the timing was disjointed and at first I thought so as well – it looked like Yellowstar went in ahead of the team. But look at this again: 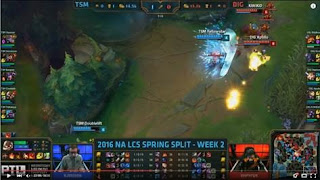 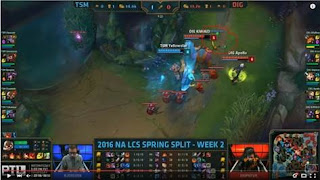 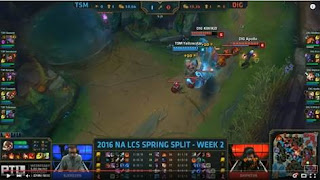 In that last frame, you can see the ward come out for Yellowstar. What he did was push the carry and support off with his shield and place a ward behind the DIG minion wave. DIG have to make a choice - cancel the TP and play 4v5 or TP BillyBoss in on the minions and risk him getting caught in the middle of TSM. DIG actually do a good job kiting and staying alive long enough for BillyBoss to get at least one kill before dying.

30:40 – Not sure DIG are doing here, they have a flank but don’t do any damage and Kirei gets blown up.

33:10 – I can’t blame Kirei here, he needs to clear wards, but he gets Kiwikid caught and they cannot turn it around. Shiphtur walks up but Hauntzer is right behind him. This is the type of gamesense and shot calling that TSM need to seriously compete.

37:35 – DIG get their first dragon, but TSM immediately ping mid and Hauntzer is unstoppable at the top inhibitor. DIG lost vision of their jungle. This game is pretty much over, TSM wisely play it safe.

40:22 – TSM are overpowered but continue to execute mechanically. They stop the engage from Alistar and then everyone does a great job kiting and peeling to keep Doublelift alive after a big Lux laser and Ezreal True Shot. BillyBoss tries an aggressive flanking TP, but the team walk out of it without giving up a kill. Hauntzer flanks DIG and the game is over. Sven and Bjergsen were really good on the kite and disengage. If you’re going to play with these power picks, you have to cover for each other in the disengage and TSM accomplished that.

GRADES
TSM
Hauntzer / A- / Amazing Poppy play yet again. She’s been good against a fighter (Fiora) and a tank (Gnar)
Svenskeren / A- / He solidly outplayed Kirei
Bjergsen / B+ / Good pressure on the other lanes after building a CS lead on Lux. Who would have thought (me! me!)
Doublelift / B / He was pretty passive, but it seems like TSM don’t want him hard carrying. They juked DIG in their gameplan by focusing on Graves and Poppy
Yellowstar / B+ / Better coordination and teamfighting mechanics this game

DIG
BillyBoss / C / In his defense, TSM focused on him and never let him get big
Kirei / C / Could never find the right engage and wasn’t a presence in lane
Shiphtur / B- / Lux did some nice things but Bjergsen covered the map much better than Shiphtur did. Lack of mobility from this champ has forever been a problem
Apollo / B- / Had some early success against Doublelift but couldn’t press the advantage