A Quick Note About Scott Brooks

Soon after the regular season ended, talk of the Thunder firing Scott Brooks started. This was my Twitter reaction: 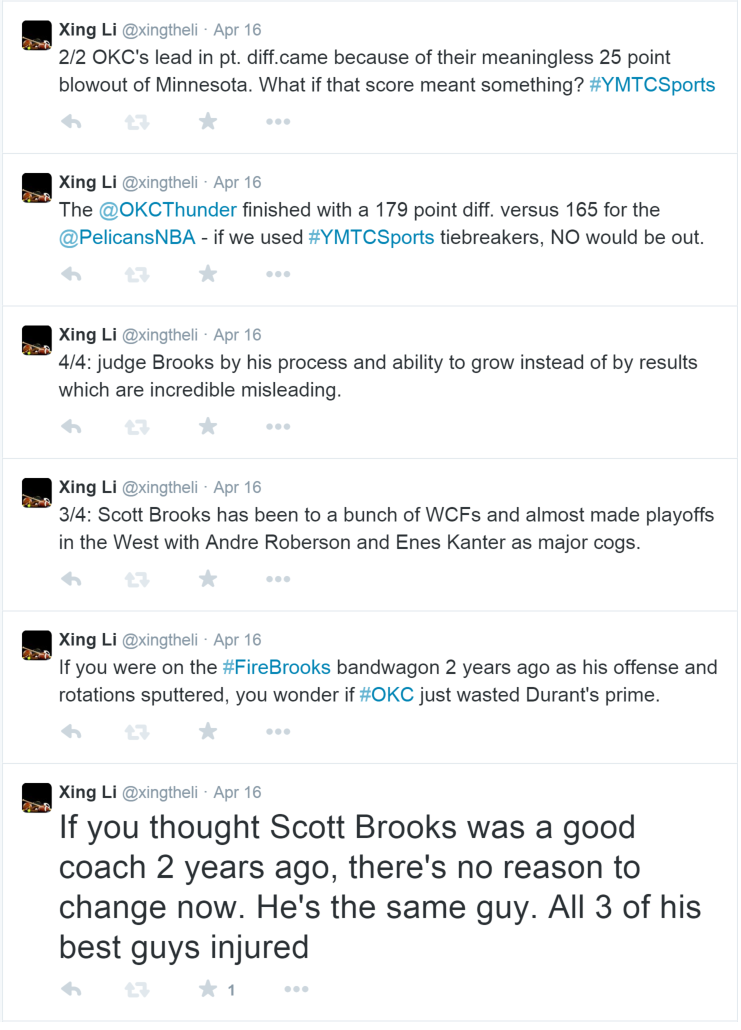 In 2015, the Thunder lost 14 more games than they did the previous year. The Thunder, according to Kevin Pelton, also lost 19.2 wins above replacement to injury this year. They lost 14.4 wins from Kevin Durant's injury alone, measured by the year over year change in his win shares. The point? The Thunder didn't miss the playoffs because of Scott Brooks. It was a minor miracle that Brooks was able to keep his team together, adjust on the fly, and give the Western Conference shivvers at the prospect of playing his Thunder squad.

The major differences between this year's Thunder and the teams that made deep playoff runs in past years are injuries and luck. That sounds simplistic or misleading, but it's true. Last year's bunch survived a seven game first round series against Memphis on the back of some timely shooting and good luck. The next round, they won in six against the Clippers, a series that may have been decided by a few bad calls. Would Brooks have been fired if they had lost in the first round instead of the conference finals?

Scott Brooks hasn't really changed in three years. He still manages his team well. He's gotten better at rotations, though still fails to make adjustments quickly. He still doesn't know what a modern NBA offense looks like but his guys play hard on the defensive end. He's the same guy. If you thought Brooks should have been fired two years ago, then today is a belated vindication, and a sad one since the Thunder have missed out on two years of potential development. But if you thought that Scott Brooks was a good coach a year ago, then he's still a good coach now. He's the same guy.

My point isn't to defend Brooks. My point is that the process behind his firing is indicative of everything that's wrong with the league's darling small-market team. By firing him now, Sam Presti is acknowleding that he knew - he knew his coach was holding the team back - and did nothing. He sat by because the Thunder were getting lucky and going on playoff runs. He sat by as his players went through a streak of injury luck before the wheels fell off in the worst possible way. He watched the Thunder waste the beginning of Durant's prime without a guarantee that Kevin will stick around for the end of it.

Presti took two seasons too long to decide to part with his coach, and that has had a cascading effect on the franchise. Forget the Harden trade. They had their reasons for that. Over the last two years, the Thunder have gone from timid (keeping Brooks and Kendrick Perkins too long) to panicked (trades for Dion Waiters and Enes Kanter). Instead of trusting whatever process he sold himself on two years ago, he's gone off-script. And that tells me Sam Presti may need to go. He has done great things for this franchise, and has Durant, Russel Westbrook, Serge Ibaka, and Steven Adams to show for it. But those were decisions made under the auspices of the broader plan. He isn't so good at improvising - just look at what happened with Harden. Maybe he can get his mojo back. But my guess is that with Kevin Durant's free agency looming, the Thunder will be forced to think more about results than process. They'll be forced to go against everything that made them the NBA's small market template.

I really hope that they can get it together and keep Kevin. I think the Thunder make the NBA better. I hope that Presti can take a deep breath, trust the process, and reboot. I will admit that part of me will miss decrying Scott Brooks and his decisions on Twitter. Here's hoping that he, too, can get back to the big stage.
Posted by Unknown at 10:00 PM