A Journey Through NBA Team Statistics

We’re nearing the conclusion of a 4-part series on the Cavaliers’ new big man that started once it became clear he was leaving Minnesota. Parts 1 and 2 examined why he was left Minnesota and how he compares to other great players at his position. But stats like rebounds and assists and 3s tell only part of the story. That part of the story is rosy for Love – comps include historically great players like Kareem, Wilt, Worthy, Bird, and Garnett. Part 3 will look at if Love’s statistical output had an effect on his previous team. Part 4 will examine if that effect translates into winning games.

Comparing players with Basketball-Reference’s season finder tool present two immediate problems. First, it’s easy to cherry-pick an individual’s stats, coming up with a unique combination that only elite players have accumulated over a season. I’m not sure of this, but I suspect that we can take a merely above-average player, like say Deron Williams, and cherry pick a set of numbers that will place him in elite company. Oh look:

Did you know that Deron is the one of 8 players in NBA history to shoot better than 50% from the field and 39% from three (on a good number of 3 point attempts), take over 5 free throws per game, and score over 18.5 points per game? A shooting, slashing, passing, foul-drawing guard? He must be a Hall of Famer, right?

If you add his passing prowess, the list gets even more exclusive:

My point isn’t to pick on Deron; young Deron was an exciting, efficient player that challenged Steve Nash and Chris Paul for the point guard throne. But two clear outliers in that second list prove that by selectively picking stats, a merely great player like Williams or a slightly above average guy like Goran Dragic can seem like all-timers.

The second complication with statistical analysis is that box score stats do not fully describe player value, especially when value is ascribed to winning games (and playoff series, of which Love has seen none). It has not been lost on the blogosphere that in 8 seasons, Love’s teams cracked 40 wins once, last year in an overall losing effort. There are again two main problems with using statistics to value players:


The good news is that we are getting more answers through more complex data, including player tracking technology, more rigorous statistical model building, and other tools. I’m not going to attempt that today (my H-P laptop can’t handle it). Instead, I used Basketball Reference to build an Excel database of NBA team statistics going back to the 2001 season (certain stats were not kept prior to that season). My statistics are for teams, so an extrapolation of an individual player’s contribution will be tricky, but my basic questions are twofold:

I will attempt to answer the first question in this post and the second in Part 4.

In previous posts, I’ve illustrated how Love is a historically great rebounder, passer, and shooter. To measure his effect on Minnesota’s team-wide stats, I compared Minnesota’s performance in each of the 121 statistical measures to the league average in each of Love’s 6 years with the team (excepting the 2012-2013 season in which he played only 18 games). I also included the 2007-2008 season before Love was drafted as a point of reference. I ran Minnesota’s differentials against the league standard deviation in each category to see just how much better/worse Minnesota was. These are the largest negative and positive and negative: 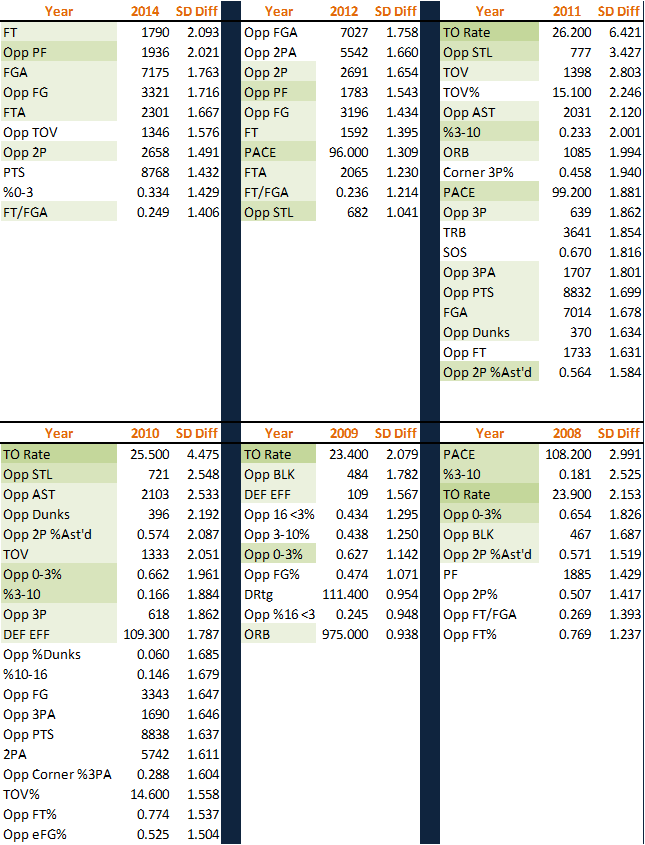 My criteria were the either top 10 differentials in each year or differentials above 1.500 standard deviations, whichever came last. I have highlighted stat categories that show up multiple times in either chart, with the shades getting progressively darker as a category shows up more times.

TO rate is a good place to start digesting these charts. From 2008 – 2012, the Timberwolves played at a fast pace and turned the ball over a ton. While that seems counter to the argument that Love is a great passing big man, I think it more accurately reflects the quality of point guards that Love had on his team. Remember – last year was basically the only year Love and Rubio played together with the TO rate diving to significantly below league averages (see negative section below).

Another set of numbers that show up a lot are opponent shooting numbers, which seems to befit Love’s (and Nikola Pekovic’s, to be fair) reputation as a poor defender. Everything from total FGs made to dunks to FGs attempted within 3 feet to assisted field goals show up on the Wolves’ chart. The good news is that the defense has improved over the last 7 seasons. But hold on – just because teams are attempting more shots (and quality shots) doesn’t mean they’re making them at above-average rates. Tellingly, no opponent FG%-related numbers show up past 2010. It seems Wolves opponents aren’t making more of their shots as much as shooting more – given Minnesota’s ability to rebound (see below), this seems to relate to the Wolves’ penchant for turning the ball over.

The Timberwolves’ offense has also improved, measured by increasing amounts of close field goals (though not dunks, not with Rubio, love, and Pekovic around) and free throws. As the team’s preeminent free-throw generator (Love took 27.5% of the team’s FTs in 2014, compare with LeBron at 23.3% and FT maven James Harden at 26.1%), Love had a big hand in the Timberwolves attempting the 3rd-most FTs in the game last year, right behind the stats-oriented Rockets and athletic Clippers.

Where Did the 3s and Rebounds Go?

The most curious thing about this chart is that Love’s prowess as a 3-point shooter and rebounder don’t show in his team’s stats. The former makes sense to a degree – Love generally shoots from the wing or top of the line, not really stretching the defense side-to-side and generating open corner 3s for teammates. And while Love led the team by taking a whopping 28.7% of total threes last year, the next three shooters after 2nd place Kevin Martin (38.7% from 3) were JJ Barea (31.6%), Corey Brewer (28.0%), and Ricky Rubio (33.1%). Not exactly guys you want chucking from deep.

But what about the rebound rate? Fearing a data error, I double-checked the Wolves’ rebound rates for each of the last several years and the results are conclusive: outside a good year in 2011, the Wolves simply did not rebound significantly more than their opponents compared to the league average. What’s interesting is that going over the last several seasons, league-wide standard deviations for defensive and total rebounds (compared to the amount of such rebounds available) are quite small relative to other counting stats. Take a look:

This chart indicates that over the last 7 seasons (roughly over 200 team seasons and close to 17,000 games), teams tend to score about the same number of points (low standard deviation compared to the average amount of points scored, or red shaded boxes). The same is true for field goals attempted and defensive/total rebounds. This indicates that the amount of rebounds a team gets is heavily range-bound: regardless of team quality or personnel, the difference from the worst rebounding teams to the best may be immaterial. From the data, 1 standard deviation of total rebounds averages +/- 1.67 boards a game. Assuming a normal distribution, the average number of team rebounds/game is 41.9 with 95% of teams within a range of 38.6 - 45.3. By comparison, the standard deviation of assists (yellow box) is similar at around 1.57 dimes a game, but since teams average only 21.5 assists per game, the marginal assist has greater relative value. Marginal values for steals and blocks are even higher, which has been discussed in research by 538.

Applied to Love, this way of thinking may prove his gaudy total rebound numbers insignificant – as long as teams generate relatively the same amount of rebounds (especially defensive) regardless of personnel, what’s the point of having an excellent defensive rebounder? He may merely by cannibalizing rebounds that would have been available to other teammates anyway.

Areas of high standard deviation include the aforementioned steals and blocks, but also threes and offensive boards. This makes sense: Blocks generally require big dudes that can jump – there are only so many of those to go around. 3s are a product of a team’s playing and coaching philosophy, which varies greatly based on the staff and personnel. Offensive rebounds are interesting – teams can have drastically different approaches, either really going for offensive boards (like the Pacers) or eschewing them to get back on D (the Spurs).

This is where it’s important to note that Love is not merely a defensive rebounder: he led the league in offensive boards in 2011 and was 5th in 2012 before tailing off as he started to shoot more 3s, itself a high variance category that Love is very good at. Also, there’s no quantifying Love’s ridiculous ability to track ball flight, get into rebounding location, grab the board, pivot without bringing the ball down, and launching an overhand pass to a streaking player for an open shot. He may only do this a couple times a game, but it shows that a Kevin Love rebound may be inherently more valuable than a rebound from someone else. Measuring that will require further effort. 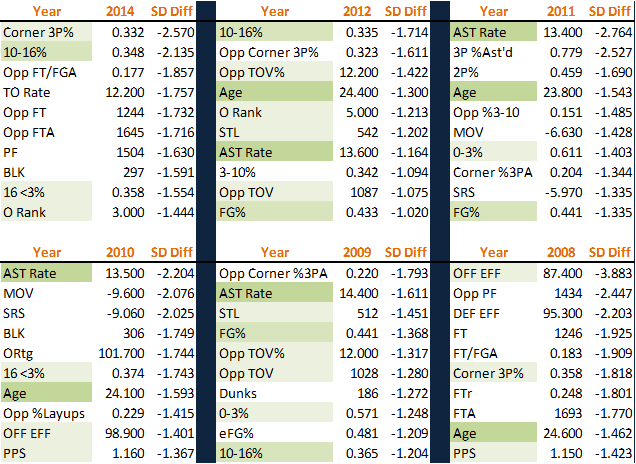 The first thing that stood out: Wow, the Wolves were bad at passing the ball. Here are some non-Rubio point guards Love has played with:


Oh, and they played for Kurt Rambis in the triangle. And Randy Whitman and Kevin McHale were involved at some point. No wonder the assist rate was so low.

The other thing that jumps out: this is a young team. Outside of Ridnour and Al Jefferson, who hardly qualified with the unfortunate injuries he suffered, I can’t think of a single quality veteran Kevin Love has ever played with. Seriously. Think of one.

The last thing I'll point out: the Wolves don’t make a ton of field goals in the paint or from three. But they do a good job of limiting inefficient mid-range shots, particularly long 2s. Of course, that could have as much to do with Rubio’s inability to shoot from mid-range as much as Love’s efficiency. And it really hasn't helped their FG%.

I was originally going to include a more in-depth correlation section on stats and wins, but that is being pushed to Part 4. If Part 2 served as a reminder of how elite Love’s numbers have been, this post has muddied the water a bit. It is unclear how much Love’s elite stat accumulation ability has translated to his team. The answer to my question, if Kevin Love contributes to his team’s measurable outperformance, is so far, “maybe.” He definitely makes a difference in FTs and given the quality of Minnesota’s point guards, I believe he adds to assists as well. But the one thing that Love is historically elite at, rebounding, was lost in the noise. Basketball is such a team event, it’s hard for one person to dramatically alter his team’s performance unilaterally. It will take more in-depth study to show the true nature of Love’s effect on his team. “Maybe” is a somewhat disappointing end result, but that’s why sport are so compelling – they, more often than not, elude comprehension.

How impressive are Love's gaudy stat totals? You make the calls #YouMakeTheCalls #YMTC #YMTCSports
Posted by Unknown at 10:05 PM