Isn't football season the best? College football on Friday and Saturday (currently USC @ Stanford) mixed with a little US Open (KEI NISHIKORI!), the a full Sunday slate of games. It's one of the reasons why having the Basketball World Cup this time of year was a horrible idea. I loved watching the 2010 World Championship in the dead of the summer, but with so much going on, it's hard to flip to watch our men's team annihilate Mexico.

As is our tradition, my colleague @BPix03 and I started the season by picking overs and unders on team win totals. This is how it went (I'm not especially proud of myself): 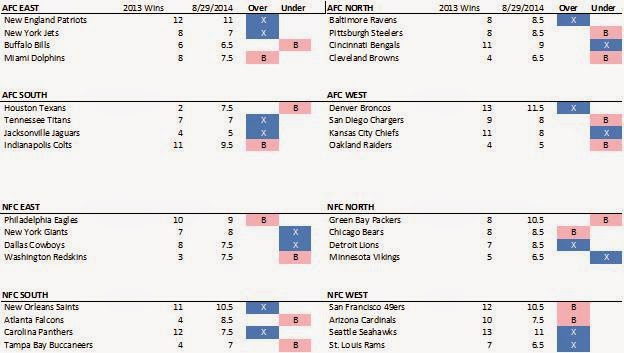 I won this competition last year picking almost exclusively unders. Naturally, I had to go against my own advice and pick bullishly. Seriously, 11 of my 16 picks are overs. What is wrong with me? Let's take this division by division and see what happened:

I have no idea why the Patriots over was so low. I realize, per Grantland's Bill Barnwell, they outperformed last year's Pythagorean wins total by 1.5 wins (3rd luckiest) and were 6th luckiest in close games. But they're still playing in the AFC East (despite a tougher out-of-division schedule), and Rob Gronkowski has to be healthier, right? I'm going bullish on the offense even without Logan Mankins as Brady will have another offseason's rapport with Danny Amendola, Kembrell Thompkins, and Aaron Dobson. And the defense should be much improved with Darrell Revis and the other new additions. I think 12-4 is doable again.

As for the Jets, I picked them last and decided to go over for the same reasons as I did New England - the defense is still going to be good, and the offense has to be better, right? I also really like BPix's under on the Bills (don't like Doug Marrone and the Sammy Watkins pick is quickly turning into a disaster) and the over the the Dolphins. As I wrote in my QB Corner post on Ryan Tannehill, his decision making should improve in the quick-read Chip Kelly~esque offense. If he does, they should get to 9-7 and if he doesn't, he'll be replaced.

I took the over on Jacksonville because I fell for Blake Bortles in the preseason. Yeah, this is not going to end well. I think the defense will be better and 6 wins is in reach. But if that's the ceiling, maybe I should have taken a longer look at the floor. As for Tennessee, I don't know. Ken Wisenhunt likes big, strong QBs like Jake Locker, right? They'll have a running game, right? They have to get to 8-8? Crap.

Weirdly, I disagree with BPix' picks in this division, too. I think with that defensive line, Houston can get to 8-8 playing the Jags and Titans twice. And the Colts I think may decline more than people think - they haven't added anything on a defense that gave up 100 87 points to the Chiefs and Patriots in last year's playoffs. Sure, Luck will be better (if he doesn't take a beating first), but Reggie Wayne is still coming off the ACL injury and while I believe in Hakkem Nicks, you have good reason not to as well. Just a confusing division; let's move on.

Another division of relative mediocrity. I am UNDER on the Bengals as the only notable offseason move they made was to sign Jason Campbell to back up the erstwhile disappointing Andy Dalton. The offensive line should still be good but the defense will again have to be elite for the team to make the playoffs. As far as the Ravens - I think they're defense will be better and I love the potential of Gary Kubiak's offense to fit Ray Rice, Joe Flacco, Torrey Smith, and Dennis Pitta. Problem is, it usually takes 2 years for the learning curve of the zone running game to be overcome. Still, in this division, 9-7 should be doable for a team just a year removed from a Super Bowl win.

I like both of BPix' moves in this division. The Steelers are done. When was the last time they had a good young player? I guess Antonio Brown is only 26, but they don't have any depth anywhere on the team. It may be time for coach Mike Tomlin to move on and a new front office to completely re-build. Cleveland could surprise with that defense and Johnny Manziel, but no Josh Gordon? Losing your best player is kinda tough.

I'm over on the Broncos - I think 12 wins is a given for this team as along as Peyton stays healthy. Sure, you have to factor in the likelihood of an injury and what that would do to the team, but I still think they're a winning team with Brock Osweiler - remember, this team won a playoff game with Tim Tebow. They are still a little thin because of their big contracts, but if a few of those free agent additions pan out (I liked Demarcus Ware a lot), this team should be good for 13 wins. As for the Chiefs, Vegas lowered their win total a lot, and I think I took the bait by going under. This should still be a 9-7 team. My bad.

I like BPix's under on the Raiders but think the Chargers can still be good - Keenan Allen was a revelation and that offense should continue to chug along. The worst defense from a year ago defense is a huge concern though and the running game is highly suspect. I don't blame him for going under. Two teams from this division probably make the playoffs, I'm just not sure which the second will be.

I am never right with the NFC East. All these teams could be good, it's just a matter of who gets injured in what ways. I love the Dallas under - if anyone gets hurt, they're screwed. The Giants? Not so sure, but I'm wary of Eli turning back into good Eli for a consistent period of time. Sure, he should get better with a more conservative offense, but his numbers from last year were really bad: 4.55 ANYPA (lowest since his rookie year), 6.6% sacks and 4.9% interception (catastrophes), and completed fewer than 60% of passes for the 6th time in 10 seasons. Even if he were to get 20% better, he's nowhere near a top-10 QB. The defense has holes and the offensive line is uninspiring. I think this is Coughlin's last year with New York needing to rebuild.

I like BPix taking the over on the Eagles as they should win the division. I don't know what to think of the Redskins, though I think they could go 8-8.

Unlike the NFC East, I have dominated this division for two straight years. Adding Brandin Cooks to the already electrifying Saints offense should be good, and I'm bullish on their safeties and running game, two essential components to maintaining leads. I took the Panthers over despite a plethora of bad news surrounding the offense. Last year's receiving corps was horrible - I think this year's can't be worse and the defense is still an elite group.

I'm not so sure of either BPix's selections. Atlanta could bounce back with a much improved offensive line (assuming they are improved). Anecdotally, last year, Matt Ryan led the league in sacks that took his team out of field goal range. And Tampa Bay should be stronger on defense and discipline with Lovie Smith in house. 7 wins is a lot for them though, and I'm fine with the under.

Another division where up to 3 teams could make the playoffs. I don't like what Matthew Stafford is doing. The defense could be worse and Jim Caldwell is not going to help much. I have no idea why I went over 8.5 win, itself 1.5 wins more than the team achieved last year. Conversely, I think Minnesota has a shot to beat 6.5 wins if they get Teddy Bridgewater in the game and throw exclusively to Cordarelle Patterson.

BPix basically made a bet that the Bears would win the division ahead of the Packers, which I'm fine with. While last Thursday's loss to the Seahawks was rough, it's rough every time a team plays Seattle in Seattle. The Packers should be better with their offensive line intact and Eddie Lacy back. The Bears should also be good in the second year of Trestman.

The Seahawks should be able to sleepwalk their way to 12 wins. The schedule is tough and I thought Marshawn Lynch would wear down (lots of carriers, held out to start camp), but Rusell Wilson continues to impress and the defensive is the defense. The Rams defense should be improved and losing Sam Bradford didn't move any needles for me. They'll rush the heck out of teams and if the offense can get more out of Tavon Austin, they should be good for 7 wins. Again, though, that's a ceiling and I should have taken the floor.

I like BPix's overs in this division. Arizona's offense should continue to evolve with Andre Ellington (if he's healthy) and Michael Floyd. The 49ers have had a rough go of things lately, and they need to clean up the off-field stuff desperately. But this is a team that won 12 games last year against a tough schedule while playing replacement-level receivers a majority of the season. They should get back to 11-12 wins with a much improved group.

That's a wrap for now. See you on Sunday! You make the calls. #YMTC #YouMakeTheCalls
Posted by Unknown at 3:24 PM

Email ThisBlogThis!Share to TwitterShare to FacebookShare to Pinterest
Labels: 2014 NFL Preview, NFL, YMTC, You Make a The Calls, YouMakeTheCalls