I’m not going to bore you with a recap or an analysis of why the Spurs won. They obviously did because they were the better team and deserved to win. I will admit a dash of disappointment – watching the Spurs brand of basketball at its apex is exhilarating, couldn’t we have gotten a couple more games? I’m not going to talk about what I got right (Spurs need for another ball handler) and wrong (Heat shooters failing spectacularly). I wanted to share some of the things that I learned watching this series.

The Spurs’ Offense – If It Were Easy, Everyone Would Play Like This. The Spurs offense is so fun to watch. The ball flies around, from corner to corner, from one pick-and-roll into another, form dribble drives to shooters and back to the rim. Last year, the Spurs started figuring out the Heat defense, but Erik Spoelstra gamely made some lineup adjustments and Miami cranked up the pressure in Games 6 and 7. There was nowhere to hide this year. Guys rocketed of screens, made heady, quick decisions, and shot the ball with confidence. One of my favorite plays of the Finals was an innocuous Patty Mills leakout where, upon seeing no defenders back, Mills pulled up and canned a 3. Some coaches deride this kind of play – you can shoot 3’s any time, why not take it to the rim? But I enjoyed how decisive Mills was, how he was unafraid to take a three in this moment, and that open threes are what the Spurs’ offense is designed to generate in the first place – why not take the first one and push the pace?
Read more »
Posted by Unknown at 5:23 PM No comments:

A Quick Note About the French

No, not the French side that will be in Brazil. I'm talking Roland Garros, and specifically, a Spaniard at Roland Garros.

I've seen Rafael Nadal play a lot. I'm not able to catch every tournament, or even every match of the majors. But I try to tune in around the 3rd round or so at big tournaments and see how these guys are doing. The end can come terrifyingly quick for even the greatest of players, and I don't want to have missed any legendary matches while they're occurring.

So I'm no Rafa expert, but I do know his game a little. And it seems a little like a team from South Florida that's pretty good at basketball. Rafa is tennis' Miami Heat.

Flashback to the 2013 NBA Finals

I just wrote a post comparing the Miami Heat and San Antonio Spurs to their counterparts from last year's historic series. I thought it would be interesting to revisit my comments previewing that series, indicate where I was right or wrong, and how things have changed. Original thoughts in italics, new thoughts in orange.

The Heat have had 3 days off, the Spurs a week. Strangely I think this benefits both teams. The Heat don't need a long layoff, they need a light at the end of the tunnel. Dwyane Wade's knee is not going to feel better with a few extra days may actually have felt worse. I wouldn't be surprised if he had an arthroscopic procedure after the season to clean up bone spurs or something. On the other hand, the Spurs are a veteran team; I don't think the layoff affects them but will give Parker, Ginobili, Duncan, and Splitter extra R&R. I just can't imagine the Spurs coming out flat in Game 1.

This is the series I wanted. I wanted Game 7 in San Antonio, with the River Walk, with Spurs fans urging their team to finish something 24 months in the making. After it became apparent that neither the Thunder nor the Pacers have any semblance of the depth required to compete with this Spurs team, I wanted the Heat just like Tim Duncan did. They can elevate the Spurs to a higher level with their athleticism, intelligence and depth. Erik Spoelstra and Gregg Popovich (possibly two coaches with the most miss-spelled names) took turns throwing haymakers at the other until neither had anything left for an epic Game 7. Both coaches drew deep from the well: lineup switches, ice cold guys getting hot of the benches, on the fly scheme and offense changes. And the players. Records fell. Young guys like Kawhi Leonard and Danny Green proved they were ready for the Finals. Old vets like Shane Battier and Mike Miller showed they had something left. And the stars were stars. It was brutal and beautiful series all at once.

This is my Twitter feed in the waning moments of that exhilarating Game 7: 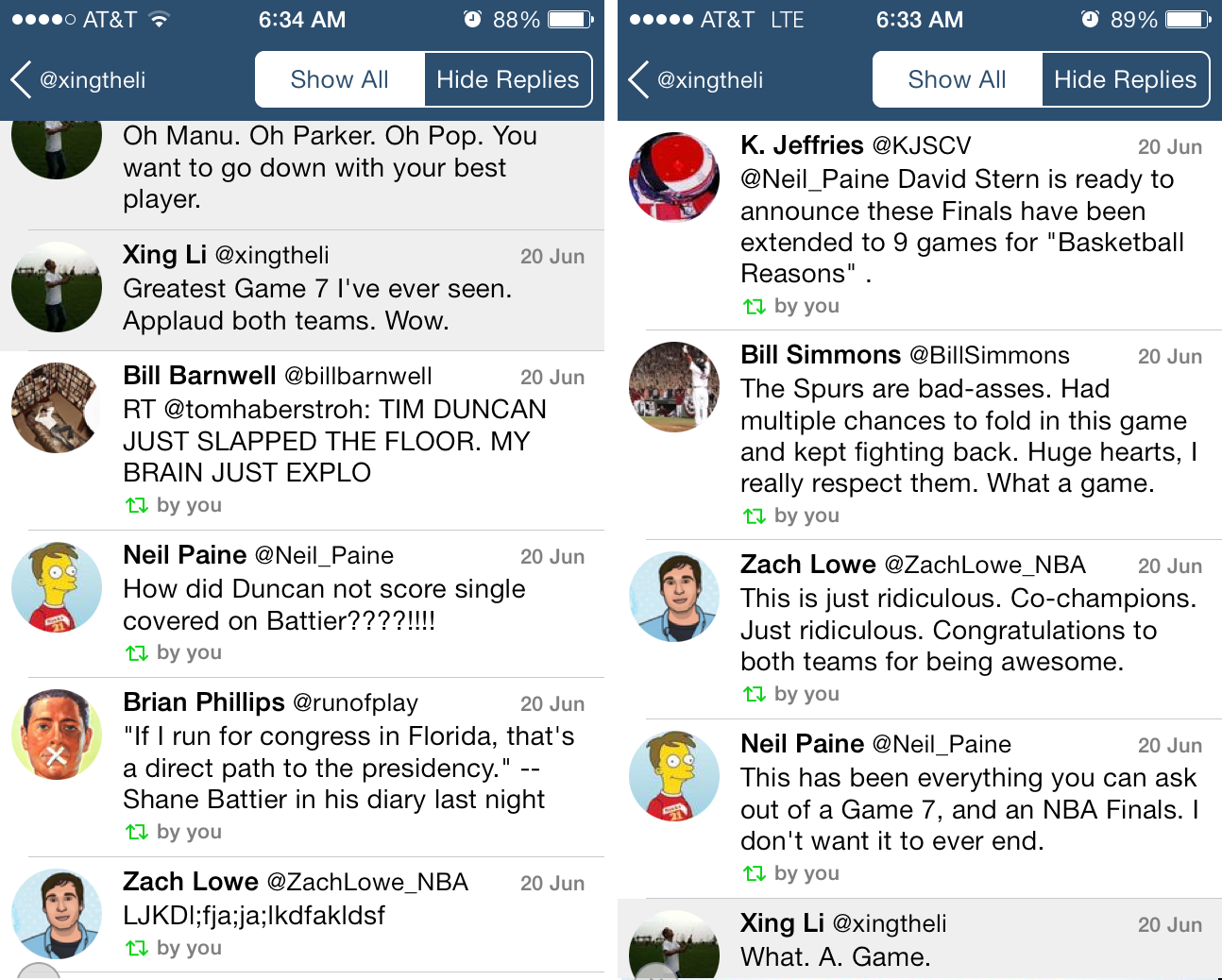 What well-played basketball. After 2013's magnificent spectacle, anything less would be a disappointment, and this has not been disappointing. Both teams are better. Miami have improved its spacing with Bosh and Lewis in the starting lineup and has a healthy Dwyane. San Antonio have a savvy Boris Diaw making plays all over the floor, spry-looking guards, and a fired-up Duncan. I wanted to examine how these year-over-year differences change the complexion of the teams and the series:

The NBA has a problem. Many think that their problem is Donald Sterling, the embattled owner of the Los Angeles Clippers franchise. Or perhaps their problem is with Shelly Sterling, Donald’s wife who has emerged as a feisty, combative wildcard. Maybe their problem is about race relations given that a high percentage of players and fans are black, and yet blacks are under-represented in the upper echelons of coaching, management, league leadership, and ownership. My contention is that none of these are truly the heart of the issue, none are the reason why this situation has made America so uncomfortable with race.

Donald Sterling's problem is NOT that he is racist. It is that he is despicable.

Let’s tackle that last part, the part about race, first. My comments on race may sound controversial, so hang on:

Donald Sterling’s problem is NOT that he is racist.

Donald Sterling’s problem is that he is despicable.

And those are two different things.
Read more »
Posted by Unknown at 5:23 PM No comments: