Each year, I think to myself that the tournament cannot get better. Each year I'm wrong. The George Masons, Butlers, and VCUs of the past are replaced by new mid-majors who play as a team and throw haymakers. Stars come out of nowhere and dazzle. Thrillers upon thrillers. And despite a bevy of last-second shots, remarkable comebacks, one of my feelings about this final four is that each team deserved to be here. Each team deserved to win. Here's why. 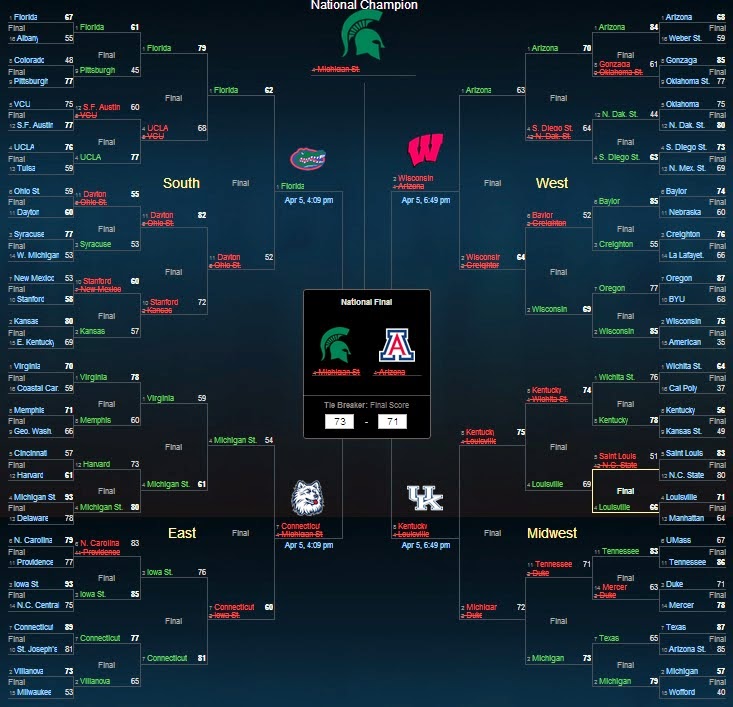 I wanted to start with the West region where I was sooo close to picking the Wisconsin Badgers to emerge. How close? In my with my closest friends my bracket looks like this: 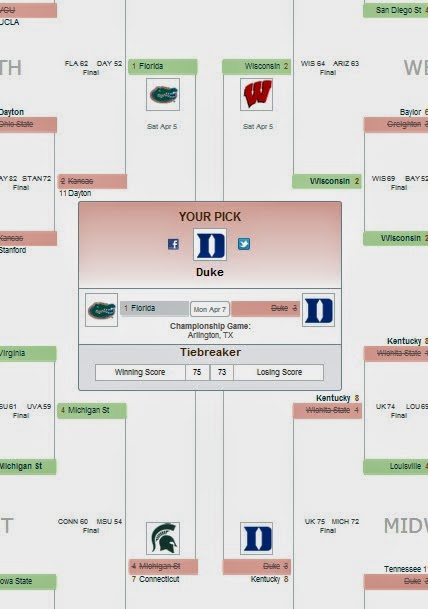 I pick Duke to win every year in this pool as support/disdain for the Blue Devils runs deep among this bunch. As you can guess, this strategy doesn't usually work out for me. I see it as an extra challenge: Can I beat my mates even knowing that my pick for the Championship will likely lose after the Sweet Sixteen first round?

My point isn't that I was close to being right. My point is that I really liked this Badgers team. I like that Bo Ryan embraced a wide open offense that gave his team more possessions to prove they are the better coached group. I like that Frank Kaminsky is a matchup nightmare for everyone and anyone. The Buzzcuts from Madison have that type of offensive and defensive cohesion that often wear down lesser brethren. Not that the Arizona Wildcats were that much lesser. No, Arizona played fantastic and Nick Johnson almost willed them to victory. After a terrific Elite Eight win over a San Diego State squad that controlled the game but couldn't buy a shot, Arizona carried over some hot shooting into this game.

But Saturday belonged to Frank Kaminsky. Surrounded by shooters and players that know to get him the ball, Kaminsky showed a little of everything: post, drive, drive and dish, step back, rebounding. A Dirk Nowitzkian effort won the day. It will be different going up against the athletic front line of another set of Wildcats next Saturday, but it's a challenge I think Frank is up for.

Speaking of those Wildcats: I know it's a tired phrase by now, but those Wildcats are playing their best ball of the season. Against a Michigan squad that could seemingly do no wrong on offense, Kentucky just wanted it more. Part of me has wanted to write the Wolverines off for four rounds now. And when you think about it, how did Nik Stauskus lead the Wolverines within 4 points of the Final Four!? This is a team that lost its two best players from last year. A team that only made the final last year after a slew of ridiculousness from Trey Burke. And Nik Stauskus had them knocking on the door again. More than anyone this tournament, he ascended to that Steph Curry level where every shot, no matter where from, no matter how taken, seems like a good look for him. There are no bad shots. It's shocking when one doesn't go in.

I've been waiting for a team to expose Michigan's weakness on the boards, and thought Tennessee could do it. Jordan Morgan and Glenn Robinson III did just enough on the boards to squeak by, but Kentucky's litany of bigs ate the Wolverines for lunch inside. Michigan had no answer for Kentucky's weak-side rebounding. Some may define this game through the lens of that fantastic last shot by Andrew Harrison. I think it was defined by a Kentucky frontcourt that wouldn't lose. Kentucky have now won four straight games with fantastic all-around play: the bigs, the guards, the defense. They wore Louisville down. They wore Louisville down. If anything makes them dangerous, it's that.

On the other side of the bracket, Michigan State played a heavyweight defensive title bout against Virginia and never really recovered. I was disappointed that a team with such great senior leadership seemed slow off the ball, weak with it, and overall disinterested in running the offense the Michigan State way. That's not taking anything away from Connecticut. The Huskies played this one perfectly. After drawing a bad DeAndre Kane game (9 assists is good, 2-9 from the line is not) and surviving Dustin Hogue's monster night, I didn't think the Huskies had a chance against Michigan State front line of Adreian Payne and Brandon Dawson. Kevin Ollie apparently agreed. He had his smaller wing players attack State's ball handlers, never allowing them to get the ball inside. I know all young point guards want a flashy dribble and a silky shoot, but for me the biggest part of playing point is making sure the ball gets to the right place. That includes post entry, knowing where lanes are, and knowing who to feed. Connecticut disrupted Gary Harris, Denzel Valentine, and Travis Trice in this regard and really messed with the Spartans' rhythm.

On the other end the Huskies get to watch Shabazz Napier do his thing. Frank Kaminsky may be the worst matchup and the Kentucky players may be the most talented, but Shabazz has been the most unstoppable player of this tournament. He always has the ball in his hands during big moments and always seems to find the right play with the rock in his hands. And if that play is contorting his body into a foul, he does it. It will be very interesting to see if Florida, a great defensive squad, can stop the UConn free throw parade.

The Gators have trounced their tournament opposition by double digits in each contest, but that doesn't mean the opposition have been wanting. They ran their offense perfectly against a long UCLA squad, getting whatever open look they wanted. In what may be the greatest compliment I have paid a team, Florida looked in complete control of that game and never looked like they would lose. UCLA fought hard and made it close early in the second, but as long as Florida stuck to their game plan, it seemed pre-ordained that over 40  minutes they would prevail.

They took that success and emulated it perfectly against a deep and talented Dayton team. How fun has it been watching the Flyers? I eventually learned the names of their starters only to be surprised when bench players came in and played heavy minutes for coach Archie Miller who seized the Brad Stevens trophy as young coach of the year (replacing Gregg Marshall, who replaced Shaka Smart). The Flyers played with a dangerous mix of belief and discipline, and to make it clear, though they overcame more talented teams, these Flyers could ball. Matt Kavanaugh controlled things from the high and low posts, and Dyshawn Pierre was everywhere. It took a team just as bought-in to their process to beat them, and that's what Billy Donovan does at Florida.

Final Four Prediction
I'm going to feel real stupid writing this. I feel stupid going against Napier, but I think the Gators pull it out. I feel stupid going against Frank Kaminsky, but I think Kentucky's length carries the day. At this point, all four teams are phenomenally well coached. I think the Gators are accustomed to playing the Huskies game of not fouling and earnings whistles and will limit the damage Connecticut can do at the line. I think the Wildcats can play Randle on Kaminsky, leaving one more shot blocker to patrol the paint. Then again, Napier has drawn fouls against some of the nation's best defensive teams and Kaminsky has dominated a bevy of NBA bigs. So, yeah, I feel real dumb about everything in this paragraph. So to cap it off, I think Kentucky beats Florida for its second title under John Calipari. I don't necessarily buy the "can't beat a team X times in a season," but I do think this is a different Kentucky team than the Gators saw in their previous three victories. Of course, there's a decent likelihood that the 'Cats lose focus by Saturday and Wisconsin rolls. I don't know! You make the call!