I did not take long for me to abandon my picks and start rooting for the Dayton Flyers. I wrote when posting my bracket that "Dayton has a shot." Did they ever. Let's recap another fantastic opening weekend while looking at the bracket carnage: 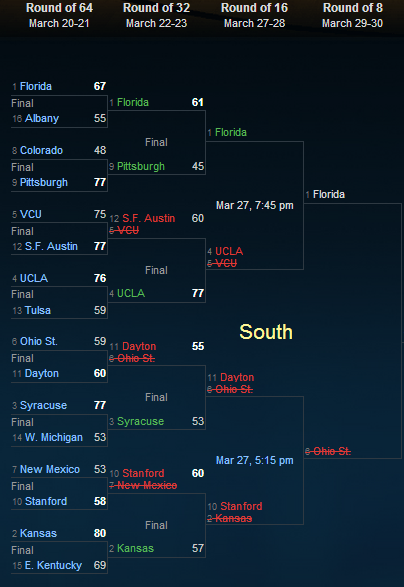 In a theme that will continue through this post, I liked the fight that Albany showed in testing Florida. A 1-16 upset is looking more and more like a possibility. I was more surprised in fact to see the Gators then blow out the Pittsburgh Panthers by 16. I picked Florida for the Final Four specifically because they can win playing strong fundamental basketball, but was surprised how they beat the Panthers up on the boards.

I was disappointed how VCU blew their first game, not because I didn't want Stephen F. Austin to pull the upset, but because of the way the Rams lost. Shaka Smart usually has such well-coached teams, it was unnerving to see them give up a 4-point play to allow the Lumberjacks to tie the game. Still, those Lumberjacks shot over 50% from the field and made more free throws than the Rams attempted, led by surefire first rounder Jabari Jacob Parker. Unfortunately, the Lumberjacks offense dried in the game against UCLA, whose offense looked even better than in their win against Tulsa. I'm still distrustful of the Bruins - I don't know how Steve Alfford does in a close game against Billy Donovan.

Dayton is making its case as a Cinderella by making huge shots in the clutch to beat Ohio State and Syracuse. The Syracuse win was especially telling - it's tough to prepare for the zone just two days after the opening round, and I like how the Flyers took it to the Orange - the controlled the pace of the game and how they wanted their offense to run. I still don't know why Jim Boeheim didn't elect to start pressing sooner - I never get why coaches with deeper, more athletic teams don't press their advantage, speeding up the game and forcing your opponent to pay 94 feet of offense. But credit the Flyers who made some monster threes down the stretch and forced Tyler Ennis into two tough jumpers to end the game.

Stanford over New Mexico was a great game featuring two teams that like to play inside out. Aussie Cameron Bairstow had a monster second half for the Lobos, but despite defending well, they couldn't find offense from another source. The Cardinal win over Kansas exposed the Jayhawks' problems inside without Joel Embiid, but for me, it exposed Andrew Wiggins. I am firmly against one-on-one offense, but in the second half, Wiggins looked like he wanted no part in trying to score on the Cardinal defense. I don't know that tentative is the right word, as he seemed to decisively swing the ball away most times he got it. The whole Kansas offense seemed bothered by Stanford's length. I like the guy but Bill Self is not helping his reputation as a shaky postseason coach. This was another team that would have been served with more trapping, more transition opportunities, and a faster game in general. 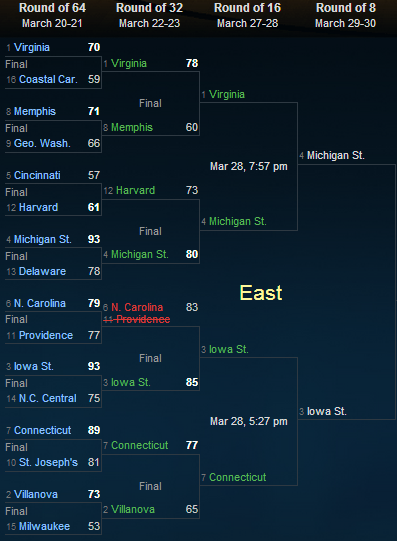 This region was kind of chalky. Virginia was in some close ones but didn't panic and trusted their talent and coaching, kind of a microcosm of their season. The Wahoos look like they have a better shot at the Final Four than I gave them credit for. The game against Michigan State should be a well coached affair.

I didn't think Harvard over Cincinnati was much of an upset at all - the Crimson are good. They can really shoot it and defended well, and point guard Siyani Chambers led them to victory as I predicted. I was proud of how they gave Michigan State a real run in the second half. State's perimeter defense locked down though and that was it.

Providence started horribly in their game against North Carolina but stormed back in the second half and held a lead for a long time. But James Michael McAdoo and the Tarheels made the big shots in the clutch and stole this in a thriller. UNC played another thriller against Iowa State, who was without fantastic big man Georges Niang. This time, the Cyclones made big shots to erase a late Carolina lead and emerge victors. When DeAndre Kane put his head down on the fateful drive, you could tell the Carolina defense was compromised before he even scored. The Cyclones cannot replace a player of Niang's caliber - he is a strong fundamental player on both ends - but with Kane playing lights-out, they have a puncher's chance against anybody.

At the bottom of the bracket, Connecticut played another great game against a feisty Saint Joseph's squad. The Hawks had a shot at the end of regulation but Connecticut's depth proved decisive in the extra period. I wrote in my preview that Shabazz Napier could shoot his team in or out of this game. I thought picking Napier and his hot hand in the next game may have been a mistake, but the choice proved prescient as UCONN again. Basketball is a team sport but Napier v. Kane in the Sweet Sixteen is going to be a heavyweight fight. 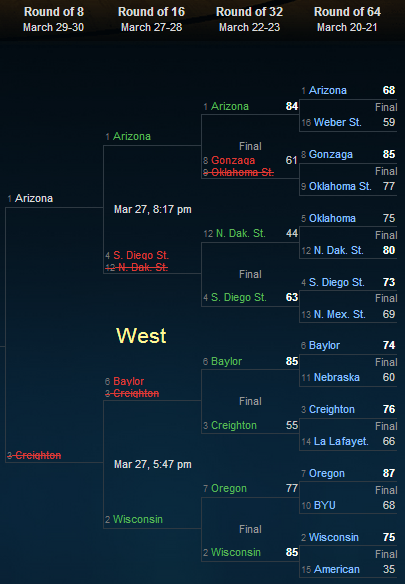 Arizona had some trouble against Weber State but turned on the gas against Gonzaga in the second round (it will always be the second round to me). I wrote about the Zags' first round match against Oklahoma State that "Mark Few has the better team and is the better coach, but Marcus Smart is the better point guard." Then Kevin Pangos happened. Why do I keep forgetting about that guy?

I got North Dakota State over Oklahoma and felt good about the Bison's chances - they beat a Big 12 team with their best scorer struggling. Taylor Braun never turned it around against the defensive buzzsaw of San Diego State. He looks like he needs to develop his strength, left hand, and ability to go glass.

In the bottom half of the region, I needed Creighton to get hot from beyond the arc, but the Baylor Bears just had better horses. A lot better. Thoroughbreds. Oregon and Wisconsin predictably won big in the first round and the Ducks had a chance to tie the game late. Wisconsin hit some big 3's to come back though, and I liked their patience with the offense. A few missed 3's didn't deter them from trusting the process and shooting more. My number one rule of shooting is to never be afraid to miss. 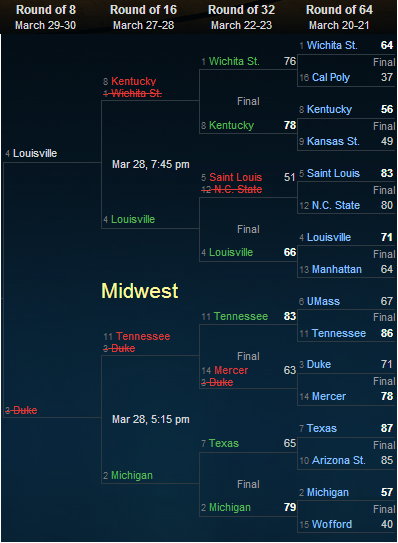 The region of death. Death really came too soon for the Wichita State Shockers. I'm not saying that the Shockers would have made the Final Four playing in any of the other regions, but a second round date with the Kentucky Wildcats was plain unfair. Of all the platitudes I can give the Shockers, this captures how I've felt about their magnificent season: their first and final loss came in a game where they forced the most talented team in the nation to finally play up to its potential. They made the young Wildcats play the game of their lives to stay in the tournament. I've been down on Julius Randle all year, but the Randle I saw in that game was possessed. The Harrison twins played fantastic down the stretch. This bodes well for Kentucky's chances in the later rounds. I'll really miss seeing Cleanthony Early and Fred VanVleet but Gregg Marshall and his team have nothing to hang their heads about.

After all, that there couldn't be a better game in this region right? Turns out Louisville's first round win over Manhattan was just as exciting. This behind-the-scenes look at Masiello and his Jaspers team is well worth a read. They came out and played with attitude against the team I thought was the best in the reason. Year after year, Louisville comes out and intimidates mid majors with its press, wearing them down in a bevy of turnovers and bad shots. Manhattan came out in this game like they wanted the ball and they knew what to do with it. Emmy Anduhar came off the bench for the Jaspers and nailed some enormous shots. Rhamel Brown patrolled the paint against bigger, stronger, and faster Cardinals, not yielding an inch. And Ashton Pankey submitted a performance I'll never forget. I will never forget him calling, begging, demanding the ball on offense. I will never forget him backing down whatever defender Rick Pitino threw at him, determined to get as close to the basket as possible, and then score. He didn't come to the game ready to play; he was ready to win. I loved his attitude, his swagger; he was the bully on the block.

Before the tournament, I wrote that the Tennessee Volunteers would "eat the [Massachusetts] Minutemen up inside." Turns out I should have included Duke/Mercer, too. At this point, Michigan have to be seriously concerned with their ability to compete against a Volunteer squad that seems to gobble every miss. As for Duke - I know a 14 over a 3 is a huge upset. I know that some believed the Blue Devils to have been the strongest 3 seed in the field. But I wrote before the game: "Duke won't lose in the first round, right?" A question, not entirely rhetorical. Listen - these veteran mid major teams are really, really good. They are well coached. They have a group of guys that have played together for years, compared to their more ballyhooed power conference brethren who often boast teams riddled with freshmen and sophomores. You'll notice a trend extending beyond just this year of mid majors consistently competing to win against much higher seeds. You don't see many of these teams get blown out - in fact, there are almost as many power conference teams blown out now as mid majors.

The Mercer Bears were one of these fantastic mid major squads. They executed their game plan, never panicked under a hail of Rasheed Sulaimon and Quinn Cook 3's, and took advantage of Duke's major weaknesses. The Blue Devils haven't been able to guard anybody all year, and their serious lack of size has been a frequent issue. I'm not making excuses for Coach Krzyzewski or his team - I'm just making the point that Duke has nothing to be ashamed of. They played a superior team, one that deserved to win, and they lost.

At the bottom of the region, Michigan have played two impressive games, but I remain concerned about their reliance on individual brilliance on offense and their potential issues rebounding against Tennessee on defense. I was down about this Wolverines squad before the tournament and remain so.

As for my Final Four - I still feel good about Florida, Arizona, Michigan State, and Louisville. I can't wait to see Napier face Kane in the Garden on Friday. March is always mad and I can't wait for the Sweet Sixteen to tip!