The year: 2009. Like always, I entered a bracket pool with my high school buddies Ryan and Brian. Like always, I chose the Duke Blue Devils to win it all, partly because of my respect and admiration for Coach K and his players and partly to rile the anti-Duke crowd (who I maintain are irrationally so). Back then, I had time to watch more regular season and conference tournament games. I was impressed by Jim Boehim's Syracuse squad for their defense, and Bob Huggins' collection of athletes at West Virginia (I was pulling for Da'sean Butler to make it with the Heat). I was one step from putting Butler in the Final Four, too - I hadn't watched them play and really hadn't heard much about them, but the team was getting some analytical love and I went with them to the Elite Eight. When Duke went to the Championship game and then won it all - ecstasy (though I had to keep my immediate celebration in-check, respecting the pro-Butler crowd). My bracket:? 99.9% on ESPN (I had a screenshot of it but my hard drive crashed the following year - get a backup, Xing!).

That's the best it's ever been. Usually I'm lucky to clear 70 - 80%. Even in 2009, I missed a Final Four contestant and I'm sure my opening rounds were riddle with errors. This prepares me to say confidently that I harbor no illusions of winning Quicken Loan's and Warren Buffet's $1bn challenge. I've watched sports for just over 2 decades, have filled out brackets for 1, and have been analyzing games for 5 years. In that span, I've had one really good bracket. One. I'm not going to win this thing. You aren't either. But that doesn't stop me from publishing my thoughts here.

First Round
Florida over Albany: Moving on...
Pittsburgh over Colorado: Pittsburgh plays old school and packs the paint. Colorado, not so much.
VCU over S.F. Austin: Havoc is hard to prepare for, though Austin can turn other over as well.
UCLA over Tulsa: I am unconvinced that UCLA is that good and as much as I like Steve Alford, am unsure of his big-game chops (solidly out-coached in the first round game against Harvard last year)
Ohio State over Dayton: I think Dayton has a shot
Syracuse over Western Michigan:
New Mexico over Stanford: I'm a bit worried about this: New Mexico pounds people inside but I'm worried about how they'll defend and attack on the perimeter.
Kansas over Eastern Kentucky: Bill Self is not going to lose another one of these, is he?

Second Round
Florida over Pittsburgh: Florida is too balanced and too good at the little things.
VCU over UCLA: Shaka Smart is the better coach, hands up or down.
Ohio State over Syracuse: Syracuse is getting Grant back, but the team hasn't looked right in the recent losses. Ohio State has the PG I trust.
Kansas over New Mexico: I don't think Kansas can stop Bair and I don't think the Lobos can stop Wiggins. Wiggins is the better player, though.

Sweet Sixteen
Florida over VCU: Florida point guard Scottie Wilbekin can be a bit turnover prome which would swing this to the Rams. But he also doesn't take dumb shots and Florida's overall talent carries the day.
Ohio State over Kansas: The re-integration of Joel Embiid should be seamless, but what if it is not? I remember in a wholly unempirical fashion Duke getting Kyrie Irving back and being unable to sustain their team play.

First Round
Virginia over Coastal Carolina
Memphis over George Washington: I've had an affinity for GW since playing with some of their guys a few years ago, but Memphis has better horses.
Harvard over Cincinnati: Harvard can rain threes and Tommy Amaker is a big-time coach
Michigan State over Delaware
Providence over UNC: the Friars have their issues, but they can score. It doesn't look like UNC are interested in stopping anyone.

Iowa State over North Carolina Central
Connecticut over Saint Joseph's: I struggled with this one. I think this may be a mistake - Shabazz Napier will have to take care of the ball and resist the urge to shoot his team out of the game. The upside is he could shoot his team into the game.
Villanova over Milawukee

Second RoundVirginia over Memphis: like Florida, Virginia can win many different ways. Memphis will be a tough test, however.
Michigan State over Harvard: State shot down Michigan's three point bombers in the Big 10 Championship. This is a bad matchup for the Crimson.
Iowa State over Providence: I keep thinking I'm overrating the Cyclones but Melvin Ejim and DeAndre Kane may be the best guard tandem in the tourney.
Connecticut over Villanova: I'm worried about this upset pick. In most of my brackets I have the Wildcats advancing and I trust Jay Wright reasonably. I really don't know why I picked Connecticut to be honest.

Sweet Sixteen:
Michigan State over Virginia: the Spartans play just as well as the Cavs, but I like the State D and backcourt a tad better. Virginia may find it hard to manufacture points in this one.
Iowa State over Connecticut: I think ISU would beat Nova/Saint Joes, too. I'm riding Kane and Ejim

WEST
First Round
Arizona over Weber State: Maybe if Weber still had Lillard...
Oklahoma State over Gonzaga: Mark Few has the better team and is the better coach, but Marcus Smart is the better point guard.
North Dakota State over Oklahoma: Taylor Bruan is the Bison's nominal point guard and he'll be the best player in this one.
San Diego State over New Mexico State: largely a pick on Steve Fisher.
Baylor over Nebraska
Creighton over University of Louisiana-Lafayette: ULL is probably not the best team in the Sun Belt.
Oregon over BYU: BYU are terrible.
Wisconsin over American

Second Round
Arizona over Oklahoma State: OSU has had a rocky year. Arizona PG T.J. McConnell is playing well.
North Dakota State over San Diego State: Could Braun be this year's Gordon Hayward? And what's with the Dakotas producing fun-to-watch guards out of nowhere (last year it was SDSU and Nate Wolters)?
Creighton over Baylor: Let the 3s rain.
Wisconsin over Oregon: Wisconsin is playing beautiful offense which isn't always the case for a Bo Ryan team.

Sweet Sixteen
Arizona over North Dakota State - I really wanted to pick the Bison to go far, but at some point you have to play defense. I will admit that his is a bit of a hedge pick.
Creighton over Wisconsin - I honestly don't have a ton of confidence in this. Creighton's hope is that it turns into a 3-point contest, which it could, and that Doug McDermott has some more magic.

MIDWEST
First Round
Wichita State over Cal-Poly
Kentucky over Kansas State: Kentucky's youth makes it hard to watch at times and Julius Randle is overrated. But they are the more talented bunch here. I'm a little worried about Andrew Harrison going cold.
NC State over St. Louis. The Billikens killed me last year (picked them for the Final Four). They may kill me for picking against them this time.
Louisville over Manhattan
Tennessee over Massachusetts: The Volunteers will eat the Minutemen up inside.
Duke over Mercer: Duke won't lose in the first round, right?
Texas over Arizona State: Can't believe I'm trusting Rick Barnes but it's amazing his team is even here.
Michigan over Wofford: I personally am not a fan of Michigan's one-on-one offense.

Second Round
Wichita State over Kentucky: A huge disparity in experience carries the Shockers. The first of two potentially unfair matchups for the Shockers.
Louisville over North Carolina State: it's tough to prepare for the Cardinals defense with such short turnaround.
Duke over Tennessee: Duke should have the two best players in this one, right? They can rebound, right?
Michigan over Texas: And there goes Barnes.

Sweet Sixteen
Louisville over Wichita State: the more I think about this, the more I think the Shockers get revenge. A bad pick.
Duke over Michigan: Duke plays no defense, but with no Mitch McGary, I don't think Michigan can expose the Devil's utter lack of size.

ELITE EIGHT
Florida over Ohio State: Overall talent and balance with a coach who's been there.
Michigan State over Iowa State: the Cyclones are hot but Sparty plays a special brand of defense. Gary Harris and Keith Appling are solid. As hot as ISU has been, they've also been inconsistent and MSU thrives on their opponent's inconsistency.
Arizona over Creighton: The Bluejays can't expose the Wildcat's rebounding woes. If Arizona doesn't see Wisconsin, I really like their chances at making the Final Four.
Louisville over Duke. Another rematch. Louisville will expose Duke PG Quinn Cook as a Roy Williams mole, planted to sabotage Duke at a critical juncture. 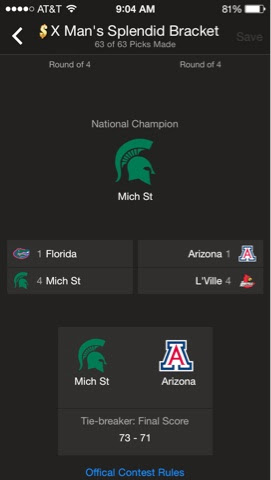 I think the extra week to prepare gives Arizona the edge against Louisville's defense. Lousville can get a bit one-dimensional on offense and must avoid that. As for the other side...

Michigan State didn't just beat Michigan in the Big 10 title game. They dismantled the Wolverines. Pantsed them. Michigan looked hesitant, unsure of how to score. The few buckets they did sink looked like prayers. That's why the Spartans will win this. The best guards, a strong front court, and a great coach. Kind of like last year's Cardinals.

Email ThisBlogThis!Share to TwitterShare to FacebookShare to Pinterest
Labels: Bracket, March Madness 2014, NCAAB, YMTC, You Make a The Calls