Rushing to the Super Bowl

You hear it all the time: The NFL is a passing league. The spread is revolutionizing the passing game. Teams are scoring more than ever. Matthew Stafford can throw for over 5,000 yards in a season. Joe Montana never threw for 4,000 yards in a season. Those who study football know that these things come and go in cycles: the Single Wing (shotgun) turned into the Wing-T offenses of the 50s, the open passing attacks of the 70s, the blitzing defenses of the 80s, the West Coast of the 90s, and the throwback runners of the early 2000s. The 2010s have been about throwing the ball short (screens), middle (seams), and deep (Megatron).

Then, the playoffs. New England, once the gold standard for passing touchdowns, rushed for 234 yards and 6 TDs in their Divisional win over the Colts. The Patriots ran 46 times to only 25 passes. The Saints rushed for over 100 yards in 2 straight games (against playoff defenses) after doing so only 5 times during the regular season. The Chargers rushed 40 times against the Bengals, manhandling Cincinnati to the tune of 196 yards. San Diego have not run for so many yards since 2011. The Seahawks set off earthquake monitors on their way to 174 rushing yards. Pass-happy Green Bay and Denver ran for 124 yards and 133 yards, respectively. The Packers were done in by a 49ers team that ran for 167 yards on a ridiculous 5.57 yards/carry.

In other words: what in the hey is going on?

To try and find out what's behind the rushing numbers, I first compared the 12 playoff teams to the rest of the league. The average NFL team (first row) rushed around 27 times a game with a 4.17 yards-per-carry average. Average yards/carry of over 4 was a bit surprising. The average team passed 35 times a game with a net yards/attempt of around 6.2 (includes sack yards). Median numbers are slightly different, but not immensely so.

Explanations for this discrepancy vary. There are three rush-heavy playoff teams that might upset the balance (Seahawks, 49ers, and Eagles), but also three pass-happy teams (Broncos, Patriots, Saints). In fact, the playoff teams consistently out-rushed the average with only the Colts and Saints running less. Another interpretation is that playoff teams won more games by rushing more, but I don't know that is necessarily the case. The explanation I gravitate towards is that, since these are the league's better teams, they more often hold leads in the games they played. Teams that hold leads tend to run more in order to burn clock.

It's also interesting to see the differences between the playing styles of the playoff teams. The most balanced teams are the Packers (because of the Aaron Rodgers injury), Chiefs, Bengals, Colts, and Chargers. The teams that rush the most don't actually produce the best per-carry results; instead the Eagles were followed by the Packers, Chiefs, and Patriots in yards/carry. In passing, Denver and Philly claim the top spots for net yards/attempt, with the Chargers a close third and the Seahawks a standard deviation away in fourth. It's interesting that Philly posted a gross yards/attempt of 8.09, surpassing Peyton Manning's 8.07, but Nick Foles' near-catastrophic sack rate brings his adjusted yards/attempt of 7.4 below Peyton's 7.8

This next chart compares each team's performance to a number of standard deviations from the league's medians:

The outliers are fascinating: Peyton Manning's yardage total for the season was 2.87 standard deviations higher than the league median, which means it ranked near the highest 0.5% of passers. His net yards/attempt figure was 2.50 deviations above, putting him in the top 2-3% by efficiency. The crazy thing? No one else got close. Drew Brees had another fantastic year, but wasn't close. The Eagles probably would have put up better stats with a full year's worth of Nick Foles at the helm, but they run so much that I don't think they catch Peyton.


So in the regular season these teams tended to rush more, with better results, than the median NFL team. Let's look at what happened in the playoffs: 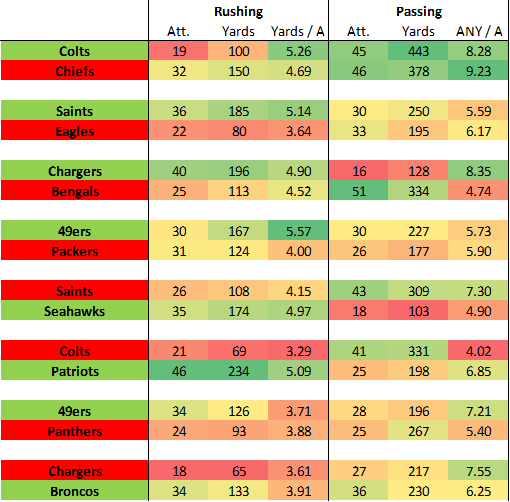 Green teams won and red teams lost. First, let's look at passing. Holy cow did the Colts win over the Chiefs produce produce some major yardage through the air. The Colts did not fare so well airing it the following week, producing the worst ANY/A of the playoffs (adjusted net yards includes for TDs and INTs). Second worst? Andy Dalton's terrible mechanics. Overall, teams that led in attempts went 3-5 and teams that led in total yards were 4-4, which makes sense because teams pass more when behind. But what is very interesting is that teams that led in ANY/A also went only 3-5. This is curious because ANY/A is a per-play efficiency stat; it doesn't matter if the QB throws more because the team is trying to come back. This year, having the best QB in the game did not correlate with winning.

What did correlate with winning? Yards per carry. Teams that won the Yards/Attempt battle went 7-1, with the one difference being the Panthers' 3.88 losing to to the 49ers' 3.71 (a negligible difference). Even teams that had to make fourth quarter comebacks to win games (Colts @ Chiefs, 49ers @ Packers, Saints @ Eagles) first out-rushed their opponents. These teams were presumably winning battles on the offensive line that made such comebacks possible.

It seems establishing a sound running game in the playoffs is a real prerequisite to winning. Part of it makes intuitive sense: just watch the Seahawks play defense. Their physical corners and safeties manhandled the Saints' receivers in last Saturday's win, and the refs for the most part swallowed their whistles. Allowing the players to settle things seems to benefit teams that can play a smashmouth brand of football. It will be interesting to see what happens if Seattle/San Francisco faces Denver in the Super Bowl, as the Broncos offense is predicated on timing and spacing of the receivers. If the refs swallow their whistles, Peyton and Co. could be in for a rude awakening. 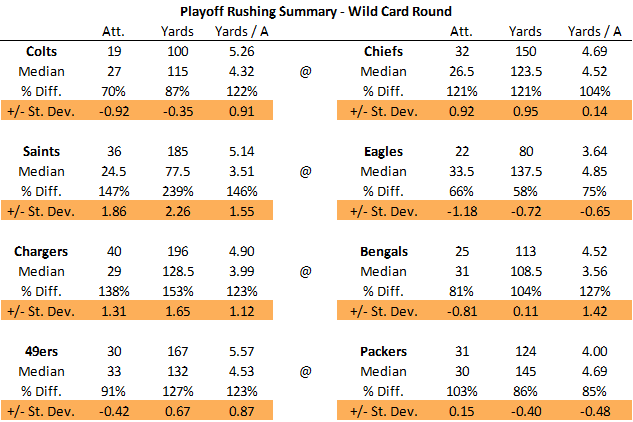 The first game, Colts @ Chiefs, is thrown off because of the sheer number of points, the big deficit the Colts fought out of, and the way both QBs decimated the opposing secondary. With a lead, the Chiefs rushed far more than they did during the regular season while the Colts rushed far less as they turned to Andrew the Giant.

In the Saints @ Eagles contest, the Eagles mysteriously abandoned the run after some early difficulty. The Eagles had the most median runs in the regular season (tied with Seattle) and trailed only the Packers in rush yards/game. They had the highest yards/carry average among the 12 teams and it wasn't particularly close; though the standard deviation of their yards/carry figure was also by far the highest. Finally the Eagles had the highest standard deviation in the number of attempts/game (9.71), meaning they saw a lot of game-to-game volatility in attempts and yard/carry for what seems like a very boom-or-bust running game. Still, for a team whose identity was running the ball, 22 rushes for 80 yards in a home playoff game is very peculiar. The Saints on the other hand rushed far more than normal (1.86 standard deviations above the median); in fact they only topped 36 rushes in one other game this year. Even with their starting running back out of the game, coach Sean Payton seemed to realize that he needed to run the ball effectively to win the game. Chip Kelly may be kicking himself for not running more, especially since LeSean McCoy is a threat to take it to the house each time he touches the ball.

The Chargers running game improved as the year went on and in their first playoff game, they ran the ball 1.31 standard deviations above the regular season median. The Bengals running game is not good - their median yards/att of 3.56 was by far the worst among the playoff field. That doesn't excuse them for forsaking the run and calling 51 Andy Dalton passes, even as the game was close for much of the second half. I don't think I have to tell you the result when Andy Dalton throws 51 times in a playoff game. Can't run and can't pass? The Bengals have some soul searching to do on offense (The bad news? They have to do it without Jay Gruden. The good news? They get to do it without Jay Gruden).

The 49ers and Packers both opted to rush heavily in the frigid conditions at Lambeau, the 49ers were just better at it. Of all 12 teams, the Packers saw the most game to game volatility in their yards/attempt (st. dev. of 1.42, the 49ers were second at 1.19); of course, playing the 49ers front 7 didn't help.

No doubt you'll point out weather affected that last game, and it certainly may have swayed the coaches towards the run. But the other three games were played in rather benign conditions (the potential Philly snowstorm didn't happen) that should not have taken passing plays out of a team's scheme. Even if those Saints had practiced for the run, Sean Payton is one of the best halftime adjusters in the league; surely he would have turned Drew Brees loose if he saw something worth taking. The next Sunday, the Saints were the only team to face really inclement weather in Seattle (and it was really bad): 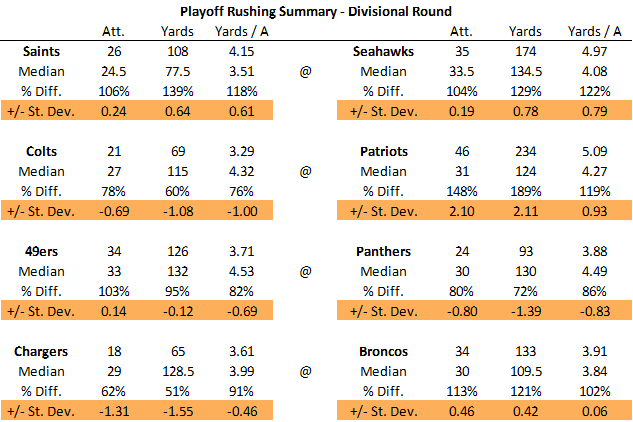 In the Divisional round, both the Saints and Seahawks had success running the ball, the Seahawks were just able to turn those runs into points. I think this game was closer than it may have appeared, and if Drew Brees didn't miss so many receivers (looked like he couldn't get a grip on the ball), it could have been even closer.

Then, the Patriots. 2.10 standard deviations above median in number of attempts and 2.11 in total yards places this rushing performance in the top 2.2% of what you can expect from this Patriots team. In other words, the Patriots ran the heck out of the ball. LeGarrette Blount has had amazing stats the last few weeks, but sometimes I wonder if he's even the Patriots best back (Stevan Ridley and Shane Vereen are pretty good, too). Scary.

The 49ers beat the Panthers by squelching the Cats' running game which now seems like a trend. The Broncos ran a little more than usual for a bit better efficiency, enough to help them top the Chargers, whose running game fell apart after it became apparent Ryan Matthews was hampered by injury. Still, the Denver run defense has been stout up the middle despite some considerable injuries; they will surely need such a defensive performance when they meet the red-hot Patriots run game next week.

Overall, 9 playoff teams ran more than they were expected to, and 7 ran less. Teams that ran more were 6-3 with the losses being the Saints, Chiefs, and Packers. I understand that this is a small sample size and multiple years of data would be necessary to prove the efficacy of rushing in January. But the coaches seem to believe it. The teams believe it. Maybe in this day of big passing numbers, running the ball is still what wins Super Bowls.
Posted by Unknown at 9:43 PM