In Part 1 and Part 2, I made some fantastic fake trades with Coach Hubie Brown's help. But what does the league look like now? Here, I'll break down each team's optimal starting 5 and top 3 bench players, their respective PERs, and my projected win total for that team. I'll sort these in order of projected finishing record.

How did I come up with the records? The Hollinger analysis on the ESPN Trade Machine uses a combination of PER and other factors. I thought it would be interesting to regress the total PER of a team's top 8 (by minutes played) against their regular season record for the last 3 years and see how strong of an indicator PER is. I thought about using a weighted-average PER as PER is a per-play effectiveness stat and for many players decrease as they play more minutes, but decided that this effect should be relatively uniform across the league (i.e. each team has players that play great for <= 20 minutes a game). Also, I ran out of time. 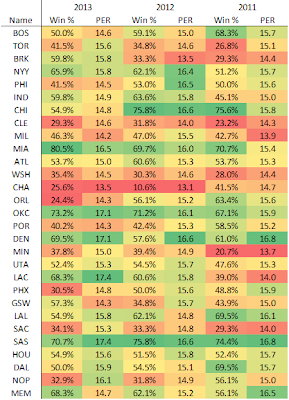 PER is the average of the team's top 8 players by minutes played. Color codes indicate ranking for that particular year.


A few notes: one of the first things I noticed was that basing win % on PER largely ignores defense (outside traditional BLK, STL, and REB stats), hence strong defensive teams are underrated by PER. Last year's Pacers and the '12 and '11 Bulls both had middling PER figures but a tremendous amount of wins. Second, +/- may be more accurate as it eliminates some of the effect of luck in close games. While +/- may be a more effective way to determine playoff success, for my purposes, I wanted to see what the regular season records would look like, and playoff seeding as a result.

Now for the juicy part: how well does PER correlate to winning percentage? 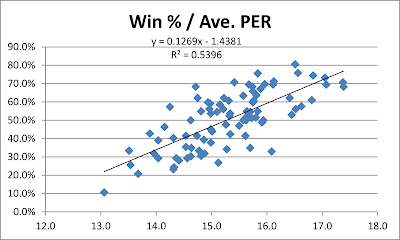 There are a whole bunch of other statistical tests I could do; let me know which ones you'd like to see and I'll consider for a future post.

Seems like the data fit reasonably well. Correlation between PER and Winning % came to be 0.735 (on a scale from -1 to 1, where 1 is a perfect correlation). Based on R-squared, the fit of the data to the line (I chose a logarithmic line) is 0.54, again where 1 would fit perfectly. This indicates that while PER generally predicts winning in terms of trends, just under 50% of winning % remains unexplained. Good enough for me.

The reason I'm doing this is to build a formula to determine baseline wins based on the PER of each team's top 8, post-trades. That formula is seen in the above chart. It will look something like this:

Holy Moses did I blow up the C's (yellow = traded away, green = new player)! This is what happens when you fight fire with trades. Their forecasted season record is a little high, but that is what happens when using a flawed, one-variable formula. The formula will still do a decent job comparing teams, which you'll see when I finish the others. Check back for Part 4 to see how the other 28 teams shake out.