This has been long time coming. I'm up to my neck in football footage but needed this off my chest. First, the embarrassing part: my picks with my wife, Ems. 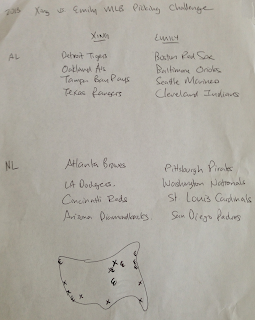 So, not so good. Some background: I lost last year's Cremant Decanter (the winner's cup for my sports picking competition with @BPix). My wife then ridiculed me as it seemed countless hours of watching film and statistical analysis had gone to waste. Determined to prove her wrong, we decided to go head to head in the same competition.

I had the first overall pick by virtue of a coin flip and picked the Detroit Tigers, who at the time, had pole position in their division, the two best pitchers in the league, and a power-hitting lineup. My wife? She picked by geography, specifically places she'd like to visit or had cool names (notice the map at the bottom of the page?). And she likes Boston. That will come into play later (obviously). I followed with the A's (who were leading their division), the Rays (coming on strong, as usual), and the Rangers (insurance for the A's) sandwiched around her selections of the Orioles, Mariners, and Indians. Quite confident

In the NL, she somehow had the prescience to get the Pirates (I did show her how the ESPN standings work and what the numbers mean). I followed with the Braves and she with the Nationals (chortling). With my second pick, I really should have taken the Cardinals. Despite being in a furious division race with the Pirates and Reds, I wanted the safety of taking a division winner, one on an insane winning streak to boot. Plus, I figured she'd pick some random team from a city she'd like to visit - St. Louis wasn't on that list was it? Well, she did it. She up and picked the Cardinals. Crap.

After the play-in games, I led 3-1 in the AL and 2-2 in the NL. I needed the Rays to beat the Red Sox to really sew up the win, but alas, their starting pitching fell apart on the way to a disheartening loss, and we tied in both leagues. Then, Armageddon. Both the Sox and Cards won, erasing my 2-team lead, and with the two playing each other in the Classic, Ems was guaranteed a point and the win.

The salvation was that I diversified risk a bit and did take the Cardinals in my "official" picks with @BPix. Their run to the World Series, along with a Dodgers win over the Braves did him in: 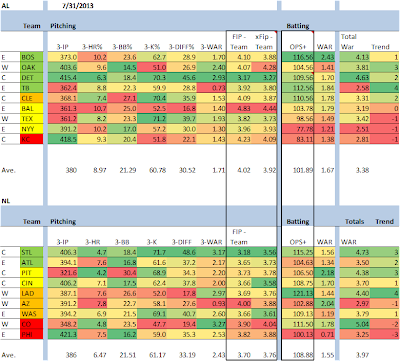 First, I think this year's statistical analysis mostly held. Red Sox pitching was probably better than average, but their hitting blew away star pitcher after star pitcher. Detroit certainly turned out to be playoff material and gave the Sox a great series. Tampa was unable to overcome mediocre pitching and some bad batting, and Oakland wasn't able to generate enough timely offense to overcome the Tigers, despite some sensational pitching from rookie Sonny Gray (more on this later). In the ALCS, injuries really showed in the Tigers' loss to the Sox (more on this later as well).

The stats really didn't tell the whole story about this year's Dodgers due to the emergence of Yasiel Puig and the moving parts in the lineup, but their bats made short work of the Braves in the NLDS. St. Louis' entire pitching staff was far superior to that of Pittsburgh's during the season and it showed in their series. In the NLCS, the injury to Nelson Cruz did the Rangers in, which brings me to things we learned from the playoffs: