In my last post, I pointed out something quite interesting: of the teams in playoff contention (top 9 in each league), the NL teams dominate their AL counterparts from a statistics standpoint (a brief explanation of statistics at the bottom). This was also the case in 2012, where (adjusting for no Strasburg), the top 3 starters for each NL team (by innings) averaged a 3.64 FIP compared to 3.86 in the AL (5.7% advantage), and yet the NL sluggers averaged 107.84 OPS+ compared to 101.76 in the AL (6.0% variance). These are big differences between the leagues, and the Giants' World Series sweep was a partial validation that something is going on between the leagues.


One obvious answer is that the NL contenders are loading up on wins against an easier conference. Good thing we can test for some of these effects. First, let's look at gross stats for all teams in both leagues: 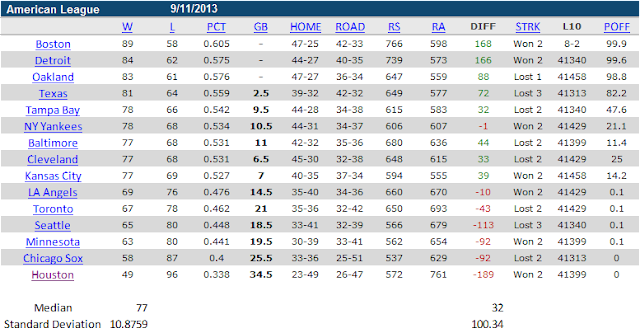 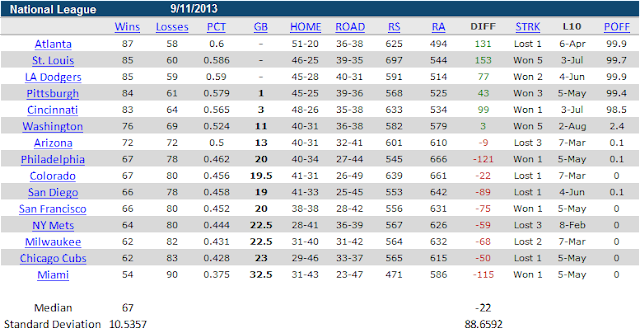 All charts courtesy of ESPN

First, let's look at median wins: 77 in the AL and 67 in the NL. That's a big difference. The median AL team is a full 10 wins better than its NL counterpart, meaning the top AL teams may have tougher competition through the year. The standard deviation is also tighter in the AL, signifying there's slightly more parity in that league. The look at the medians for run differential. The average team in the NL actually has a negative run differential, which means they should be under 0.500. The deviation here favors the AL though, and that is largely reflected by the teams at the top of the AL (Boston and Detroit) that deviate far above average.

I also thought total runs scored was interesting. It's higher in the AL, which is expected due to the designated hitter effect (a guy who's job is only to hit helps the offense). This makes the NL's superior OPS+ a little questionable - more research is needed.

I also charted some interleague records to see if the AL teams, on average, were winning in their few matchups with the NL: 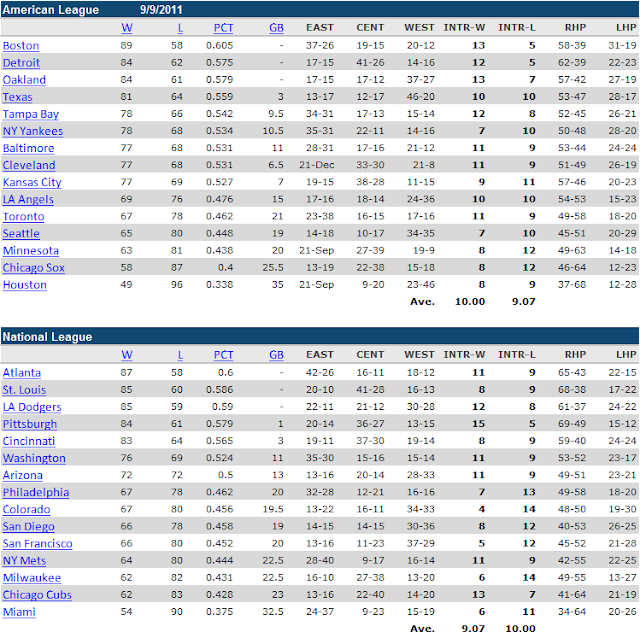 The numbers at the bottom of the interleague wins and losses columns are simple averages. The average AL team is 10-9.07 against its NL counterpart, reinforcing the theory that the AL is a deeper league with better teams. But this doesn't tell the whole story. Look at some of the records in the NL. What are Philly, Colorado, San Francisco, Milwaukee, and Miami doing!? These teams are a combined 28 - 64, a truly atrocious record. Even bottom-feeding teams in the AL can scrape together respectable interleague records like the Houston Astros' 8-9 mark, but the teams at the bottom of the NL are extraordinarily execrable.

What this means is that the AL has racked big wins against the NL basement, but when you compare the records of the teams at the top, they are relatively even. NL teams with overall records over .500 average 11 - 8 in inter-league play, almost dead even for the same teams in the AL. One final interesting thing of note in this chart is that good NL teams are slightly better against right handers (second column from the right), while the AL is a little better against left-handed pitching (far right). I don't think these differences are statistically significant, however.

The final takeaway? These charts show that AL teams can be competitive with the NL given their overall tougher level of competition that clouds their statistical output. The final column in the first two charts, POFF, stands for Playoff Odds per ESPN's database. There are 9 AL teams still in the running, with the Royals the weakest of that group. But in the NL, the playoff picture is set with the 5 teams just jockeying for position (and trying to avoid the fluky play-in game). However, to say that the contenders in the AL are better is also misleading. Sure, there are more of them, but the very best teams in the NL can absolutely hang with their AL brethren. All in all, I'm looking forward to an exciting playoff season and hopefully a more competitive World Series.

FIP: Fielding Independent Pitching. This adjusts for the effect of team defense. It tracks each ball that is pitched and assigns a league-average run value for each ball put into play. For example, say a ball is hit into deep right that normally turns into a double, but Shane Victorino snags it for an out (benefiting Boston's pitcher). FIP adjusts the pitcher's stats to reflect what the average right fielder would do on the same ball

xFIP: FIP adjusted for league-average home run rates. The "x" stands for adjustments for home run rates on fly balls. For example, the Cincinnati Reds have an average FIP of 3.66, but adjusting for their homer-friendly home park, their xFIP is 3.58

OPS+: On base + Slugging. The "+" stands for adjustments for the variances of home parks.

Run Differential: Often, a team's win-loss record is not truly reflective of its quality due to luck. Run differential uses the Pythagorean Wins formula popularized by Bill James (no real relation to Pythagoras, the progenitor of the triangle theorem) that attempts to determine how many wins a team "should" have given a certain run differential. The theory is grounded in the thought that a good team should win more games by more runs (with less luck involved), and thus have a higher run differential, while a bad team may get lucky in close games and win many one- or two-run games.
Posted by Unknown at 9:43 PM