The Miami Heat Fan Base

By now, you're familiar with the story. With 30 seconds left in regulation of their Game 6 home victory, the Heat were down by 5 after a Manu Ginobili free throw. I fully expected the Heat to lose, though I wondered if they could at least make it interesting, like a college game. But this is the NBA, not college, the Spurs can shoot and not turn it over. The league apparently thought the series was over too, what with the trophy being wheeled out, all sorts event staff ringing the sideline, and the yellow rope lining the court.

So it's fair that the Heat fans were resigned to defeat. In fact, it's normal. Expected as part of a true sport's fan's inner doubt that her team will actually make it. During Game 4 of their series, clinching win, I was nervous for the Giants, nervous because Scherzer had become a beast and because Verlander was lurking, and a 3-2 deficit doesn't se that bad for Detroit given games 1-3 were sunk costs.

What is not fair was for what the Heat fans did. They left. In droves. Dwyane Wade and LeBron James did the "right" thing by extending the olive branch, but Chris Bosh is right too: these fans didn't deserve to see the Hear this year, and should stay home for Game 7.

That's been a common refrain of mine these playoffs: Miami doesn't deserve their Heat. There's no sense of civic pride from that city that they have one of history's great teams. Or one of history's great players. Seriously, where are the "MVP! MVP!" chants? Other teams do it that don't have the 3-time MVP. The best they can do is "let's to Heat!"? They are so boring, so checked out, so not worthy of this team. They sit when Miami goes on a run, not realizing that their second unit is their best unit. They don't rise for end of quarters. They have gotten used to the amazing from LeBron.

So it's not surprising they left, but it's shocking at the same time. THESE ARE THE FINALS!!! This could be the end of the a season! Maybe the end of the Big 3! Can you imagine Boston, or San Antonio, or OKC fans leaving like this? Fans should have too much respect for their team to leave them like this. It was horrible. When you're team loses, you stand by them, applaud them off the floor, and help them hold their heads high. You watch the title ceremony because it's a sublime moment. Moments like that disappointment are what make the wins worth it. And can you imagine a casual fan, one that struggles to get regular season tickets, that watches from afar, leaving like this? I would never leave my seat! It's a disgrace to the city and a disgrace to the team. These are some of the worst fans in the league.

I wondered how good they were at even showing up. So I charted it (courtesy of ESPN). Here are the Heat compared to a few other teams. I picked the Spurs, Bulls, and Mavs because they are other successful teams over the last several years. I left out Boston (their fans are insane), as well as the L.A./N.Y. teams (market too big). I have the Suns and Pistons as other examples of teams who have experience varying success/failure over the last decade like Miami has. I wanted to determine: are these fair weather fans? 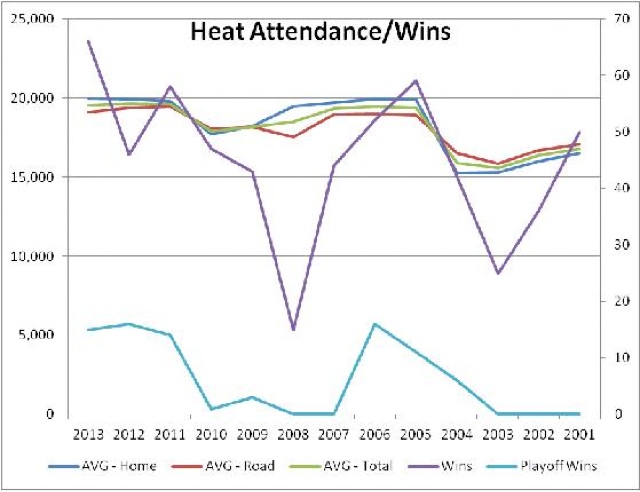 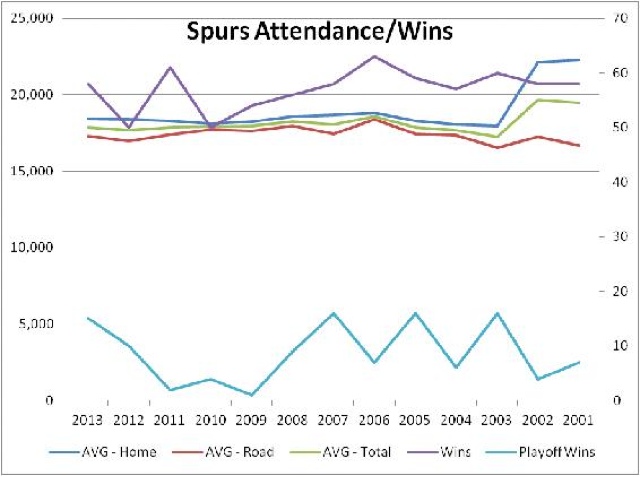 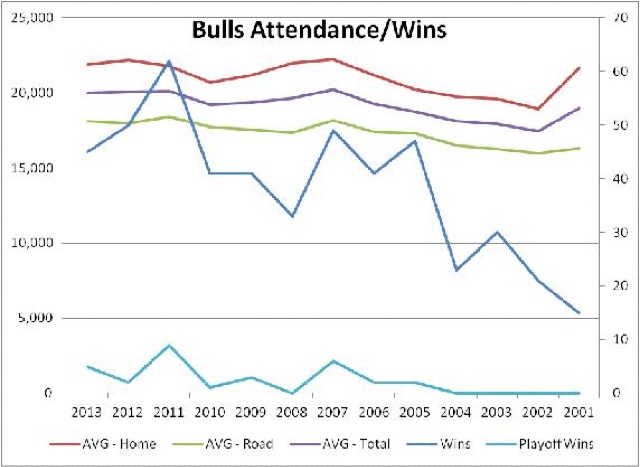 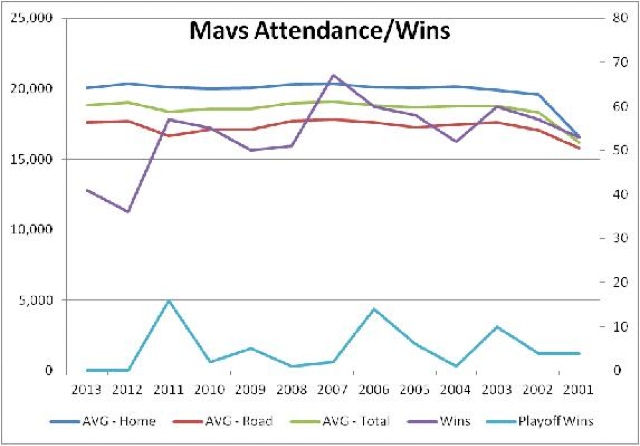 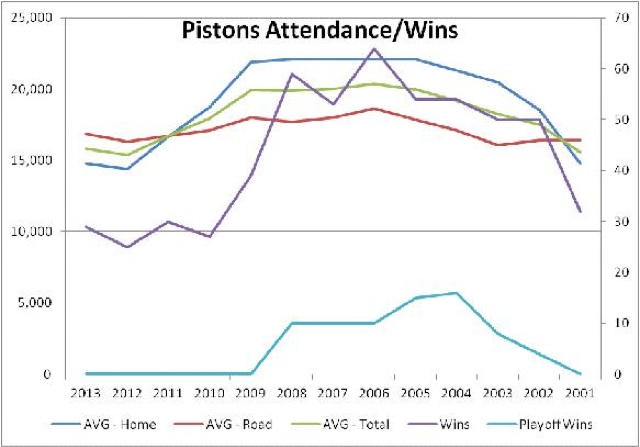 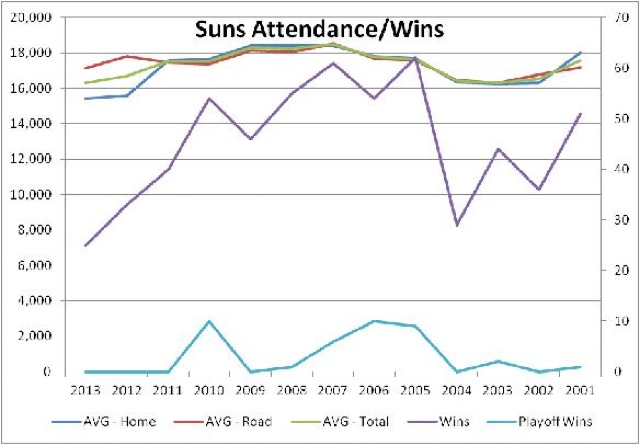 For all teams, attendance on the left axis, wins (regular season) and playoff on the right.

First of all, look at the Mavs. I understand Dallas is a big market, but I question whether its really a basketball town. Question no longer. Look how consistently they sell out their building. Incredible. San Antonio is also good at selling-out (2002/2003 are skewed by playing in the older, bigger arena). The Suns fans are also remarkably consistent despite bigger swings in team quality. From peak to trough, their attendance varies by ~11%. The Bulls have also experienced a ~10% attendance increase to lead the league as they've gotten better. And the Pistons fans seem truly fair-weather, though I have to believe the economy in Detroit has contributed to those nose-dive in attendance these past 4 years.

Miami also exhibits a stronger correlation of attendance to wins, with attendance varying by ~20% from trough to peak. So what does the correlation formula spit out ?

It actually shows that the Suns' correlation for regular season wins to attendance is the highest. The Pistons aren't far behind. The Heat are actually on the lower end. But look at the Spurs and Mavs. Their fans stay with them. Yeah, consistency helps, but Dallas has had a lean last two years and almost no detrimental effect on fan support.

I've always believed in Mark Cuban as an owner. I want  a guy like that owning my team, willing to entertain, to win. Miami? Not as bad as I expected, but their fans still have a lot of growing up to do. Especially if they want to deserve a potential repeat champion. #YouMakeTheCalls
Posted by Unknown at 5:31 PM