Popovich is a Genius, But the Spurs Aren't the Same


Everyone knows the Spurs are well coached and well managed. Coach Popovich is universally regarded as a coaching and player development genius, having shepherded his squad to four NBA titles and made dozens of bit players into productive guys with big contracts. Over the past two years, he has read the league's tea leaves and transformed the team from a grind-it-out defensive team into a high-octane, high-possession, offensive force. Check out their pace stats: from 92.3 (14th in the league) in 2010/2011 to 92.9 (7th) in 2011/2012 and 94.1 (6th) in 2012/2013.

The other way that Pop has changed the offense is through a creative offense that either places the ball at the rim (in Tony Parker's case, a floater within 10 feet is basically at the rim) or in the hands of a three point shooter. Players make hard cuts and quick, decisive moves with the ball to ensure A) players are never out of position for a pass, B) the ball never stops, and C) the defense doesn't have time to re-balance following a ball swing. The coach of the year section of this piece by Grantland's Zach Lowe highlights some of these things that Popovich has done. This new offensive strategy has produced via a huge boost in the Spurs' assist stats. This year, the Spurs have assisted on 63.65% of baskets, third in the league, while their offensive efficiency of 107.0 (points per 100 possessions) is seventh. Their assist % compares favorable to other offensive juggernauts, as seen in the following chart:

Notably, three of the top four teams in the league have assist %s that fall in the bottom half of the NBA, and yet are able to post the highest offensive ratings by virtue of their star power. Other playoff teams with high assist %s, like Chicago and Boston, have a worrying similarity to San Antonio: teams without legitimate offensive stars either due to injury or age. Instead, these teams rely on passing savvy and clever coaching to make up for it. This is not to say that Assist % is not valuable; in 2011, Dallas won the title with a league-high 63.67% of baskets assisted. However, in the playoffs, a team needs to generate points outside of clever sets. That same Dallas team leaned heavily on Dirk Nowitzki isolations to produce offense, especially in late-game scenarios. Yeah, they got a lot of assists off of Dirk's passing, but a big part of Dallas' statistically aberrant brilliance in crunch time is due to the genius of their big man.

Other statistics give a glimpse into potential issues the Spurs have compared to the other offensive juggernauts, possibly explaining their low non-assisted shooting %s: 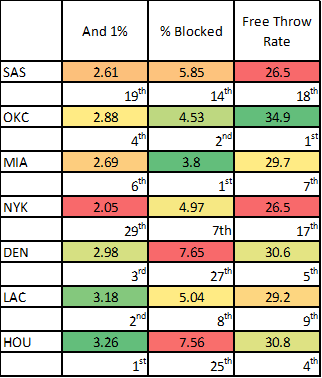 The Spurs are mediocre and drawing fouls and scoring and-ones, and have an average amount of shots blocked. This tells me that their guys are not strong enough to finish through contact, are not quick or jump high enough to finish around blocks, and are not getting into the lane and drawing fouls. None of the other offensive teams are outside the top 10 in all of these athleticism-related categories like the Spurs are. The two teams that are horrifically bad at avoiding blocks (Denver and Houston) are also getting a lot of foul calls and converting on hacks. The Knicks aren't getting those calls, but are avoiding shot blockers. And teams like the Thunder and Heat are good at everything. These are all athleticism-related aspects of the game, indicating that the Spurs lack of offense in non-assisted baskets may be due to a glaring lack of athleticism compared to the rest of the league.

We've read a lot over the years how the Spurs are getting old. It seems that every year people write them off at the beginning of the season, only for them to blow past their projected win/loss number, get a high playoff seed, and contend seriously for the title. But it has now been six years since their last Finals victory, and these stats show the Spurs are getting old, and maybe that has affected them once they've gotten to the playoffs. Look at these numbers: 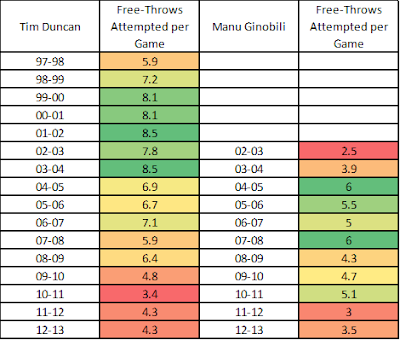 The strange thing is, the overall number of FTs the Spurs attempt per game has actually been relatively constant. But where they have gotten those FTs from has changed, as seen in the following chart: 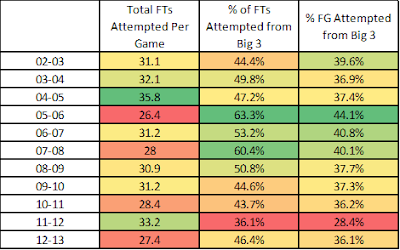 The Spurs are getting less and less from their big three. Compare this to this year's Miami team who get 48.0% of field goals and 61.3% if free throws from their Big Three, or the Thunder who get 49.4% of field goals and 61.5% of free throws from Kevin Durant, Russell Westbrook, and Serge Ibaka. If anything, it's amazing that Popovich has gotten this much out of the Spurs role players (see this fantastic article by Grantland's Carles). Popovich has blown away preseason expectations and his team's Vegas over/under (55.5 wins) by developing guys like Kawhi Leonard, Tiago Splitter, and Gary Neal, while resurrecting the careers of Danny Green, Boris Diaw, and Stephen Jackson (now Tracy McGrady). The Spurs' depth and Popovich's shrewd game planning has allowed them to succeed through an arduous NBA season and even survive long stretches without key players Parker and Ginobili.

The problem with that strategy is, in the playoffs, when other lineups shrink and stars play more minutes, these secondary players will find themselves matched up against significantly better competition, and will not be able to carry the team. The effect has even begun to creep into play during the run for playoff positioning. Including last night's embarrassing home loss to Minnesota, a game in which the Big Three all played and the Spurs still lost by 16 (scoreboard is 13, but they made a garbage 3), the Spurs are a mediocre 16-12, and only 7-8 against playoff teams. They did have a +71 point differential, meaning they have had blowout wins and close losses, but a differential of +2.54 per game would still only be 7th in the West, far below their season-long +6.4 figure.

I thought the Houston Rockets would be a bad matchup for the Spurs due to their reliance on a star player, their strong +3.5 point differential, and their offensive-focused/fast-paced style of play. But after this analysis, I am nervous about their chances in a series against the old, slow, and injured Los Angeles Lakers. The good news is they still made the Western Conference Finals last year and were arguably a fluke Serge Ibaka scoring binge from the Finals, and Gregg Popovich is still a coaching nightmare even in the playoffs, having demolished the Jazz/Ty Corbin and the Clippers/Vinny Del Negro last year. He should still be a plus against Mike D'Antoni, but it gets hairy in the next round with Denver and George Karl looming. If Denver loses and Pop can get the Clippers or the Grizzlies again, they still have a shot at this, but I'm saying now their ceiling is making the Western Conference Finals again. 26 out of the 30 teams would love to be in that position, but for a coach and core that have won four titles together, it just doesn't seem right that they may be on the outside looking in.
Posted by Unknown at 8:05 PM