Google ate my earlier post, but it was saved in Word. Saved by Microsoft? Scroogled?

In my previous two posts on the 2012 MLB season, I looked at the best teams in each league, what made them successful, and how their strengths/weaknesses compared to the other teams in the playoff picture. All assessments were made on July 11, the day after the All-Star game when I started paying attention to baseball again. In this post, I will examine some broader trends regarding both leagues and reflect on the playoff matchups. Click here for the earlier posts on the specific leagues: AL and NL.

As explained in earlier posts, I used playoff % and point differential to sort out what I believed to be the contending teams in either league, as looking at all the teams would have been exhausting. The notable absence? The 2012 Baltimore Orioles, who are covered in the AL Post.

A COMPARISON OF LEAGUE PITCHING

Moving from left to right, we see that although certain teams rely on their top three starters far more than others, when comparing across leagues, the average number of innings pitched is relatively constant. Even the standard deviation was similar (18.1 in the AL, 20.0 in the NL). The similarity between league averages could be applied across through the rest of the columns: homers/walks given, strikeouts, and the differential HRs/BBs and Ks. The lesson here, I think, is that across a broad sample of 8 teams in either league playing dozens of games through July 11, the teams tend to revert to the same midpoints. These are professionals and I suspect that it would be difficult for one group to deviate significantly from the others. While this is not unsuspected, it is a bit surprising given that I would have thought NL pitchers to fare slightly better not having to face designated hitters.

In terms of standard deviation, the leagues differ in homers and differential (varies a lot more in the NL), and walks (varies a lot more in the AL). The really fascinating part happens when you take out Stephen Strasburg out of the National’s lineup, which is reflected in the line “WAS-NO S” (there is also a second set of averages without Strasburg titled “NO S”). The standard deviation in the Differential column decrease by almost 10 full points, a 20% decline. What this shows is that taking Strasburg out of the equation, the NL teams are clustered much more closely together and the National’s huge advantage in starting pitching disappears. Let’s see what happens when we compare the rate-related pitching stats which measure each item by % of total pitches:

A COMPARISON OF LEAGUE PITCHING RATES

FIP = Fielding Independent Pitching, WAR = Wins Above Replacement; both FIP and WAR are divided by 3 to give per-player averages

The averages show that NL pitchers seem to be more conservative, giving up fewer HRs and walks, on average, with slightly fewer strikeouts. The WAR calculation from Basketball-Reference shows that this conservatism hurt them as the NL team’s average starter had a WAR slightly worse that the ace average from the AL. This indicates that aggressive pitching and strikeouts have an outsized influence on the WAR stat, possibly because they make up a bigger percentage of plate appearances pitchers face (~60% for both leagues compared to less than 30% for HR/BB combined). There are a number of WAR calculations; I chose B-R because their site is designed well and their calculation is defensible. Removing Strasburg (4.2 points of WAR himself, behind only Justin Verlander’s 5.1 and Johnny Cueto’s 4.5), the NL average declines further to 1.51, making the AL’s average starter ~19% better than a starter from the NL.

FIP is also an important stat : unlike WAR, it measures ALL balls in play, not just those that pitchers can control (HRs, BBs, and Ks). It gives the average pitching performance if all balls in play (foul ups, line drives, pop flies, etc.) were defended at a league average level. My thought is that this may take away some of the weighting towards strikeouts and reward crafty pitchers. From the FIP column, we see that the NL starters were better than their AL counterparts when we take into account other ways to get outs. This is a place for more research, but it seems that the NL pitchers are better at inducing ground balls, which are more favorable for the defense than pop flies, and also explains the lower HR rate. As to which is better in the playoffs, again, I need more research and a bigger sample.

In standard deviation, the NL seems to be a more varied league with WARs ranging from -0.10 (Atlanta Braves) to +3.10 (Nats), but the standard deviation of their WAR is actually lower than the AL, with the deviation becoming smaller when Strasburg is removed. In both leagues, the biggest deviation numbers occurred on Strikeout%, which in turn affects the Differential%. There was tremendous variability between teams with strikeout artists and teams built to produce groundouts. In both leagues, the strikeout % column seemed to predict FIP and WAR better than HR% or BB%, confirming what we saw from the total WAR comparison. Teams that strike out a high % of batters seem to do better than safe teams that focus on avoiding homers and walks.

The two outliers were the Tampa Bay Rays, whose starters had the highest combined K% in either league, a mediocre WAR and FIP in the AL, and the St. Louis Cardinals, who had a terrible K% but were average in both FIP and WAR. Outside of these teams, it seems that to compete, you need to strike guys out. In the Cardinals case, they were tops in the league at avoiding both HRs and BBs, while the Rays seemed to be good across the board except for in the WAR department.

The one thing I didn’t analyze was how a reliance on one starter, such as a Verlander, can affect a team’s performance. That may be the subject of a further analysis over multiple seasons to produce the requisite sample size. In the meantime, let’s move on to hitting.

A COMPARISON OF LEAGUE HITTING 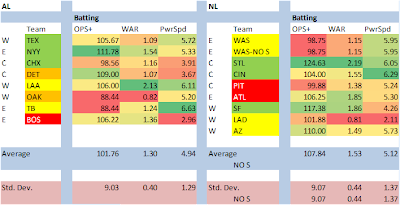 OPS = On-base + Slugging adjusted for the league and park, WAR is batting-only, PwrSpd = Baseball-Reference proprietary stat that measures athleticism through HRs and Steals

The first thing that I expected from the batting lineup analysis was for the AL to dominate because of the designated hitter. My logic: you are allowed a spot in the lineup reserved for a guy that has no other duty besides hit? A guy that doesn’t have to play defense, pitch, do anything besides get on base and drive in runs? This guy has to be the mother of all hitters, right?

I was wrong. In both OPS+ and WAR, the NL dominated. I know that the OPS+ is adjusted to be consistent in comparing leagues, which removes some of the difference, but I was still surprised that the NL was flat out better at hitting and not getting out. Removing the Dodgers, the NL’s worse team by WAR was the Nationals at 1.15; this would have bested these AL playoff teams: Texas Rangers, Detroit Tigers, and Oakland A’s, with only the Yankees on top (the Baltimore Orioles of course, are not included).

Read that again: the worst NL playoff team by hitting WAR was better than three AL contenders, and the best NL teams like the Giants and Cardinals would have absolutely dominated their AL peers. The Cardinals colossal WAR of 2.19 is nearly double that of many AL teams. A final note would be that the standard deviation in hitting is much more similar between the two leagues, but this is likely due to the fact that both OPS and WAR amalgamate hitting stats, which smooths the outcome; within a specific stat like On-base-%, there may be more variability.

A COMPARISON OF TOTAL WAR 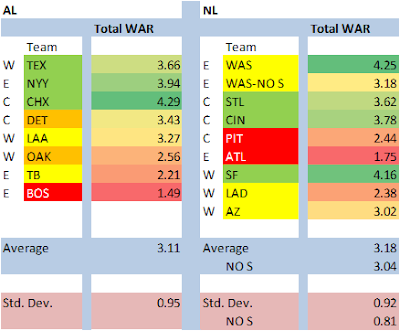 As surprised as I was throughout this comparison of leagues, the final outcome indicates that the leagues are relatively similar. I didn’t expect that the National league bats would be better but they were, and that negatively affected their pitching stats (or vice versa). While the NL was slightly better with a combined pitching + batting WAR of 3.18 to 3.11, that advantage disappears when you remove Stephen Strasburg from the equation. In fact, removing Strasburg drops the Nationals from the second-best team by WAR in either league to a mere 9th at 3.18. The best teams? Judging by stats, the Chicago White Sox should play the San Francisco Giants for the crown, with the Giants bats going against the Sox’ vaunted pitching staff. The Rangers and Yankees / Cardinals and Reds are in contention in the AL/NL, respectively.

Of course, I only got one part of that right. I was almost spot-on in the NL: The Giants were tested severely in their first round match against the second-rated Cincinnati Reds before a dramatic seven-game series against the third-ranked St. Louis Cardinals in the NLCS. Both playoff series were close, exciting affairs marked by enormous comebacks by the Giants, first from 0-2 against the Reds and then from 1-3 against the Cardinals. The Cardinals got to the NLCS by beating the aforementioned Washington Nationals in another great 5-game series that left Nats fans wondering about just a few outs. Again: the Nats lost by a matter of one out, and Strasburg had a wins above replacement of 4.2. Okay, I’m done now.

In the AL, the Yankees received much grief throughout the playoffs for their disappearing bats, and rightly so. But the three highest-rated WAR teams all achieved that through the strength of their top-3 starters, with none having a particularly imposing batting lineup (all below average). The best batting team was the L.A. Angels, who were let down by a disappointing pitching staff. And the team that won the league? Detroit’s OPS+ was solid, but their batting WAR was below average despite the presence of a triple crown winner. Their pitching WAR was also mediocre, behind the Sox in their division and also the Rangers and Yankees. So what happened?

On July 11, the Tigers were pitching stats were buoyed by Justin Verlander’s baseball-leading statistics, but held back by sub-par performances from Max Scherzer and Rick Porcello, the number 2 and 3 pitchers by innings. By the end of the season, Scherzer had heated up, allowing only 4 homers and 13 walks from August through the end of the regular season in October over 65 innings of work. So while this point-in-time analysis gave me insight into what was probably to happen in the postseason, watching the games is still important. Scherzer ended the season with a 4.0 WAR compared to 1.0 when I measured the stat, and once he got hot, Detroit became a two-ace team, something none in the league could match. Combined with the Yankees hitting/pitching meltdown, a four-game sweep is what you get.

I think it was useful seeing just how the leagues differed in 2012. Further study will be needed to see whether these are long-term trends, or seasonal aberrations. We’ve also come up with some important questions for further research. But this does it for the 2012 comparison of leagues. Next, I will briefly compare the two World Series participants using this analytical framework to determine if the Giants’ 4-game sweep of the Tigesr was really a blowout or if it should have been closer than it played. See Part 4 for a World Series Review, as well as the results of a little competition I had picking baseball teams.