What a great first round of games (it will always be the first round to me). Sure, there were blowouts, but I was impressed by how hard the teams competed, and believe the gap between the Big 6 conferences and the "Mid Majors" gets more narrow each year. For this year, that meant my picking more mid majors to go far than I have ever had. Sure, I like teams like Duke, Kansas, and Indiana. But some part of me said: this year, why not go outside of the box and mess with basketball hierarchy a little? Why not pick the Saint Louis Billikens to make it all the way to the title game? So that's the bias I filled my bracket out with, and after the First Round, here is the post-mortem on how it went.

I can't say my bracket is terrible. I went 24/32 in the first round, but went to two games at Energy Solutions Arena in Salt Lake City and managed to jinx both of the teams I saw. I had no business picking Belmont to beat Arizona, but I thought that New Mexico had a legitimate shot at the Final Four. Now my bracket has a legitimate hole in the Final Four spot from the West region. Any takers? I'm looking at you Ohio State. Then again, as long as that region is going down in flames, I might as well go big pick some Cinderella like Iowa or Wichita, right? So let's start in the West region, my worst, and see where it all went wrong. 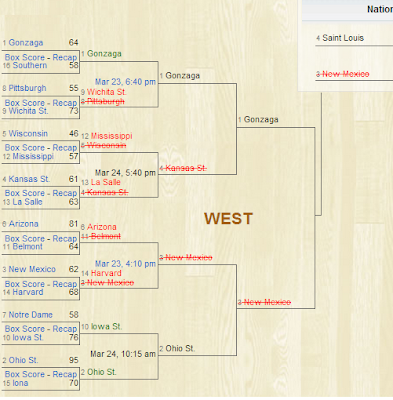 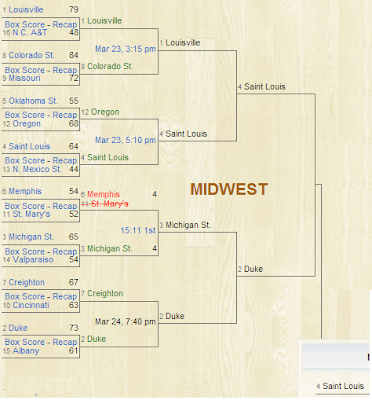 Louisville over North Carolina A&T: I didn't catch a second. Sorry.
Colorado St. over Missouri: CSU's Dorian Green went off, and that was that. Could he be related to Dorian Gray? Louisville should still win the next one.
Oregon over Oklahoma St.: I though that Oregon's underseeding was a travesty, and though I was nervous about Marcus Smart, he didn't dominate this game.
Saint Louis over New Mexico St.: I caught enough to see Saint Louis playing well, with solid defense. Still confident with them.
Memphis over St. Mary's: Matthew Dellavedova had to carry the Gaels, and the other St. Mary's shooters let him down. Beau Levesque especially looked terrible airballing three straight wide-open threes. And Memphis' D.J. Stephens really controlled the game from the paint, which I didn't expect, but should have. I haven't watched Memphis play this year, so this is on me.
Michigan St. over Valparaiso: Too much talent and execution from MSU, this game wasn't as close as the final 11 point margin. While I think Memphis with Stephens has a shot in the next game, I'm sticking with the Spartans.
Creighton over Cincinnati: Doug McDermott dominated this game like I expected.
Duke over Albany: I loved the way the Albany Great Danes came out. They played with a ton of confidence and hit some huge shots. As a Duke fan, I was happy with the way the Blue Devils played, and also happy that Albany didn't roll over. Duke needs to be tested, and Albany made this a game the whole way. Credit to the Albany shooters who were fearless from range. Gonna be a tough game against McDermott and Creighton. 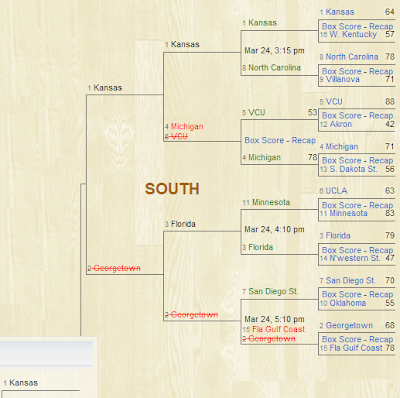 Kansas over Western Kentucky: WHAT A GAME!!! The Hilltoppers came out to play, and Kansas made so many mistakes. Elijah Johnson showed why he's the most mercurial player in the tournament. He can win or lose games for Kansas by himself. In this game, he made a bevy of mistakes with the ball, and the normally stout Kansas defense couldn't contain Western Kentucky. The game was won when the Hilltoppers went cold at the end of the second half, but wait, their press got them right back into it as Kansas continued to turn the ball over. How many steals is VCU going to have when they play the Jayhawks? Or, perhaps the better question: can Kansas get pats UNC?
UNC over Villanova: UNC had a great first half where everything was going down, making up for the turnovers. That all turned in the second half, though ultimately, the held on to win after blowing a huge lead.
VCU over Akron: I watched enough to see that Havoc is alive and well. So fun to watch their pace.
Michigan over South Dakota St.: I was watching Arizona-Belmont and could only follow on my phone. It looked disappointing as both Wolters and Burke seemed to have off games, with Michigan's talent at the other positions too much. If Wolters struggles against VCU, look out.
Minnesota over UCLA: The Bruins just didn't have enough horses.
Florida over Northwestern St.: Too much talent for the Gators.
San Diego St. over Oklahoma: SDSU guard Jamaal Franklin had an ankle injury that could have been bad, but he came back and had a great game. He does it all.
Florida Gulf Coast University over Georgetown: This wasn't about what Georgetown didn't do. FGCU just ran them out of the gym. The Eagles came out with a ton of confidence, they never backed down, attacking time and time and getting rewarded at the line. And their didn't seem to be a talent gap: they were flat out athletic and ran the Hoyas out of town. I was a little worried about John Thompson III's coaching style, but I never thought it would manifest int he first round. 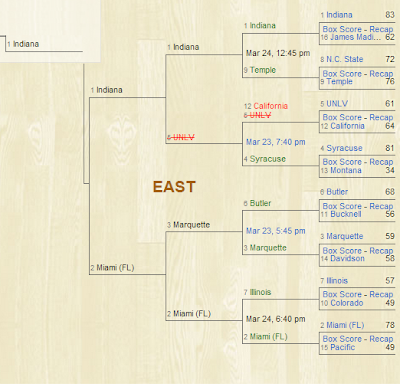 Indiana over James Madison State: Hoosiers are too balanced and talented at too many spots.
Temple over N.C. State: Temple's Khalif Wyatt came to play, and he was fantastic. The dude is a joy to watch, and has had a college career that I'll remember. N.C. State couldn't get into their offense and run as well as they'd like to, and a huge stretch without a FG killed them.
California over UNLV: Like i mentioned in my preview, this game was completely unfair. Not only have they played, this is a home game for Cal. Allen Crabbe was just a little better than Anthony Bennett. They have to continue to be hot and feed off the crowd against a tough Orange team.
Syracuse over Montana: The Orange are really good and disciplined. Too much for Montana.
Butler over Bucknell: I loved how Bucknell fought in this game. They made it really fun, and had a real chance to win. Both coaches worked hard, and Butler clamped down on defense, holding Bucknell scoreless for more than four minutes late in the second half.
Marquette over Davidson: I picked Davidson, but Marquette had no business winning this game. That turnover with four seconds left was a killer. Davidson was right there and this game was a heartbreaker.
Illinois over Colorado: I actually thought Colorado was better, but that was not the case. Illinois won a grinding game.
Miami over Pacific: This game was never close.

See you in the second round!
Posted by Unknown at 1:19 PM