Blast from the Past: Jazz add Al Jefferson in July 2010

This is an interesting draft post that never made publication. It contains my thoughts on the Jazz letting Carlos Boozer go and adding Al Jefferson in the summer of 2010. At the time, I thought it would be a three-year experiment, and though parts haven't gone at all like I thought (Sloan and Deron leaving), I think it is timely to revisit this given the Jazz are heading into a off-season of considerable uncertainty regarding their big man:

I think from the rumors I've heard that this trade is a done deal, so I'll go ahead an preemptively comment on it. Losing Carlos Boozer to add Al Jefferson? I like it.

Offensively, Jefferson was unstoppable in the post before his ACL injury. He had developed a nice series of offensive moves, both face-up and back-to-basket, though I'm not sure what his injury does to his athleticism and ability to overpower defenders. His offensive rating was 111 compared to Boozer's 112 (higher is better, score is points/100 possessions), and due to his youth, I think he has a lot of room to grow. Just take a look at his assist %: it looks the same as Boozer's did when Carlos was in Cleveland. Jerry Sloan took Boozer in and developed him into a post facilitator that could kick to shooters in the right places. Boozer's assist % jumped from 10.3% to 15.9% his first year in Utah, and his per-36 minute assist numbers increased almost 50% from ~2.0 to ~3.0. That may not be a big difference, but the threat of the pass keeps defenses more honest as well as generating good shots. Jefferson's assist % is currently 10.0%, and if he can make the same jump Boozer did, his lower turnover rate and similar true shooting % should make him a better offensive player than Boozer.

On defense, Jefferson is worse at 108 versus Boozer's 102. But I think Jefferson's ineffectiveness can be attributed somewhat to the system, or lack thereof, that Minnesota ran. In fact, his defensive rating was the best among any Timberwolf that played more than 5 minutes all season. I believe he was let down by his teammates in Minnesota and that Jerry Sloan can help me become a better defensive player.

Finally, you have to look at what the Jazz gave up. They fit Jefferson into the massive trade exception generated by the Boozer trade, meaning they got a starting-caliber big man for only two first round picks. I know picks are valuable assets, but are the Jazz really going to draft a starting center picking in the mid-first round as a lower-rung playoff team? His salary is also a bonus: expanding to ~$15mm over 3 years, that is a great level for a starting CENTER. He is younger and better, and gives the Jazz some flexibility to build around in the next three years.
Posted by Unknown at 11:08 PM No comments:

I'm done posting screenshots of my bracket. You don't need to know much else other than: Duke is the only Elite 8 team I got right, and all of my Final Four is done already (I'm looking at you, Kansas, Indiana, Saint Louis, and New Mexico). According to Yahoo! Sports, where I submitted my "official" bracket, I'm in the 23rd percentile, which may indicate the quality of the analysis contained within this blog. My defense? March is Mad. Three years ago, during Duke's magical run to the title, I correctly picked them to win and also had Butler (!!!) and Syracuse in the Final Four (along with Kansas, which lost to Northern Iowa, so not perfect). After that ended up in the 99.9th percentile, my picks have gone sharply downhill, with percentages below 50 each of the last two years. March is Mad.

One thing I did learn: this year I really wanted to pick mid majors to go far. I was/am tired of feeling conflicted when a Big 6 school plays someone small (like Western Kentucky), and I root hard for the upset, but then take guilty pleasure in the end when my bracket survives along with the favorite. I wanted to have that feeling of picking a Cinderella again, like my Butler pick in 2010. Problem is: neither Saint Louis nor New Mexico can really be considered Cinderellas. They were both seeded too high. Ditto for VCU and Butler, each with obvious flaws. What I should have done was to pick Wichita State, a team I believed in (but not enough to beat Pitt, stupid, stupid) to come out of a weak region (or at least play OSU). If I'm going to pick true upsets, might as well go bolder.

I digress. How did the Sweet Sixteen play out? I watched at least half of every game. You know the drill:

I know that we are 4 minutes into the second half in Miami-Marquette, but better late than never, right? My defense? I was trying to finish work for a long weekend, and then the weather got good and my buddies and I took it to the outdoor court near the office for some pickup and shooting. I just ran out of time, kind of like Iowa State in their loss against Ohio State. Speaking of which, let's look at the second round, starting with the West:

What a great first round of games (it will always be the first round to me). Sure, there were blowouts, but I was impressed by how hard the teams competed, and believe the gap between the Big 6 conferences and the "Mid Majors" gets more narrow each year. For this year, that meant my picking more mid majors to go far than I have ever had. Sure, I like teams like Duke, Kansas, and Indiana. But some part of me said: this year, why not go outside of the box and mess with basketball hierarchy a little? Why not pick the Saint Louis Billikens to make it all the way to the title game? So that's the bias I filled my bracket out with, and after the First Round, here is the post-mortem on how it went.

I can't say my bracket is terrible. I went 24/32 in the first round, but went to two games at Energy Solutions Arena in Salt Lake City and managed to jinx both of the teams I saw. I had no business picking Belmont to beat Arizona, but I thought that New Mexico had a legitimate shot at the Final Four. Now my bracket has a legitimate hole in the Final Four spot from the West region. Any takers? I'm looking at you Ohio State. Then again, as long as that region is going down in flames, I might as well go big pick some Cinderella like Iowa or Wichita, right? So let's start in the West region, my worst, and see where it all went wrong.

2012 March Madness Bracket Analysis
Here is my belated analysis of the brackets. I got caught yesterday watching (of course) I know we have seen a full day's worth of games already, but I will approach this analysis with virgin eyes. Later today, I will post my review of first day action, including some tidbits from watching Belmont-Arizona and Harvard-New Mexico live at Energy Solutions Arena in Salt Lake City.

Some of you know this, but the reason I launched YouMakeTheCalls was March Madness. Several years ago, captivated by Jordan Crawford's ridiculous shooting performance for the Xavier Musketeers in the tourney, I put a live commentary of his showcase on Facebook. Needless to say, that exploded the home pages of several of my friends, causing me to start this blog. This year, you can follow me as I watch as many tournament games as possible by following my twitter account: @xingtheli. See you there!
Posted by Unknown at 6:23 AM No comments:

Here it is. Commentary to come tomorrow, just know that I agonized for hours over something that will inevitably turn out horribly, horribly wrong. 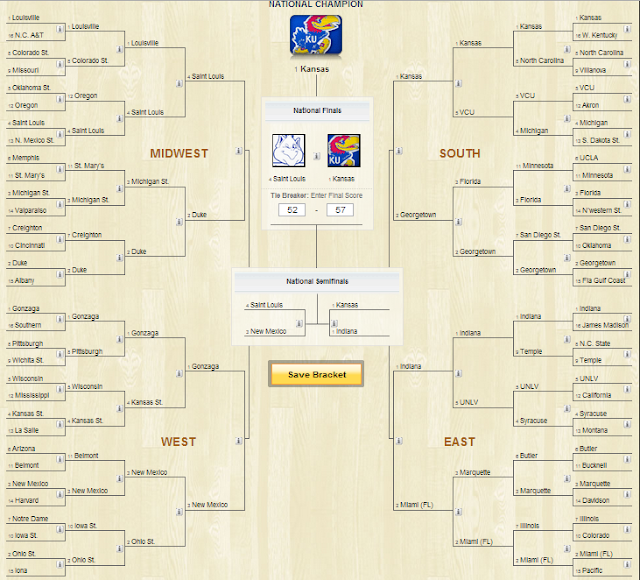