After taking a look at the American League, I wanted to switch to the more interesting of the two leagues, the National. In fact, the National League was made interesting by the Nationals, who messed with their fans, their season, and perhaps baseball history with their handling of Stephen Strasburg's injury situation, summarized very comprehensively in Jonah Keri's post on Grantland.

What happened? The Nationals shut Strasburg down for the year in early September despite having a huge lead in the division and almost certain to make the playoffs. This went against opinions from numerous pundits who like I, felt they should have managed the situation from the beginning, giving him scheduled rest throughout the season, or even starting his season in June or July so as to have him available in October. The  move infuriated their fans, who were legitimately excited about a playoff contender. This is the fascinating part: how good were the Nationals with Strasburg? Did they really have a shot to win it all?

I pulled the same charts as I did from the AL to find out, and I think D.C. fans will be disappointed. 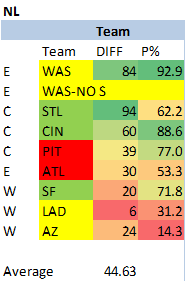 This is a playoff probability and run differential chart, a very crude (but effective) indicator of quality. What it shows is that on July 11th, the day after the All-Star break when I pulled the numbers, the Nationals were basically a lock to make the playoffs at 92.9% based on ESPN's simulator. However, their run differential was only second in the League, behind the Saint Louis Cardinals. The Cardinals at the time were second to the Cincinnati Reds in the AL Central and no lock for the playoffs, however. Of the division leaders on 7/11, the Nationals had by far the best run differential and best shot at being there in the post season. But let's dig further into the stats to see how good the Nationals really were. 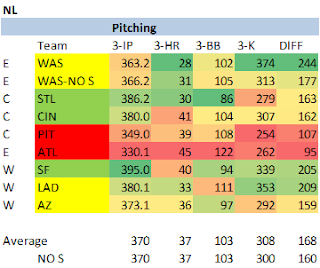 I looked at the gross stats for each team's top three starters, as explained in my AL post. I also included a line for Washington Nationals replacing Stephen Strasburg with their fourth starter by innings, Edwin Jackson. This is found in the line WAS-NO S. What you see is a Washington staff that was good at striking guys out with Strasburg but suddenly couldn't do the same without him. However, in the 3-IP column (total innings pitched), you can see that by the All-Star Break, Nationals starters had pitched only 363 innings, a mediocre number, nowhere near the reliance that Saint Louis, Cincinnati, and especially San Francisco had on their top three. So perhaps the Nats had hope without Strasburg based on their reliance on middle inning and bench relief, limiting the innings of all their starters. Of all the teams, the Giants had the best stats across the board, with the Cardinals also good at not giving up homers and walks. Of contenders, the worst staffs seemed to be the Pirates and Braves, with the Reds staff also unconvincing. 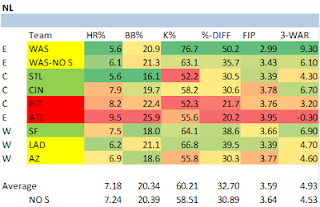 The pitching rate stats show more clearly how dominant the Nationals were with Strasburg, and how spectacularly those stats fell off without him. He represented 3.20 points of WAR, more than some entire teams. Dropping from 9.30 points of WAR to 6.10 without him brings the Nationals from +89% above the league average (among these teams) to just +35%. And taking away Strasburg makes San Francisco the best team by WAR, as well as the one team other team without a real pitching weakness (the Dodgers were also good here). Another surprise was the Saint Louis Cardinals, which I had known for their offense. They were good at almost all categories, with the exception of not getting strikeouts. However, this apparently did not translate into WAR, where they trailed the Reds, who seemed to be mediocre at everything. 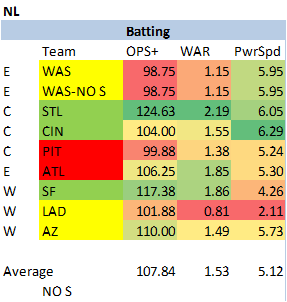 I used numbers from the top eight batters from each team, excluding  pitchers who don't bat regularly and shouldn't have a huge impact on a playoff game (I had no idea that Matt Cain was batting ~.330 in the playoffs, that turned out to be huge). While the Nationals had a huge advantage in pitching, they gave it back in On-base and Slugging (OPS+) and WAR. The best team, by a wide margin, were the Saint Louis Cardinals. Beyond those two teams, the Giants had an above-average group while the Dodgers bad stats were affected, no doubt, by the Matt Kemp injury. The Reds and their place atop the Central looks ever more precarious given mediocre batting. So what happens when we add pitching with batting? 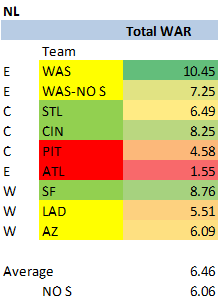 Wow. When you add in the National's phenomenal pitching with Strasburg to their league-worst batting, you get a WAR of 10.45, a whopping 62% better than the average. The advantage declines to 20% without Strasburg (7.25/6.06). In fact, their WAR of 10.45 is by far the best in both leagues (more on that in the last post). This is where Nationals fans can light themselves on fire. Their WAR without Strasburg of 7.25 is respectable, but behind teams like Cincinnati and San Francisco. The Reds and Giants turned out to be the two best teams in the conference, and you have to think that having a WAR that much higher would have led the Nationals to a series win over either team in the Championship Series. And then there's the fact that the Nationals lost in Game 5 of the LDS to Saint Louis, a team they would have dominated on paper with Strasburg. And that's before getting into the side-effects of having another ace, including a better bullpen, better pitching matchups, and ultimately, a better team atmosphere. You have to seriously think about what this team could have done with their best player in October. I keep staring at that green 10.45 and wonder what might have been.

The only thing that may be more interesting than the Nationals situation is that of San Francisco and Cincinnati. Remember that LDS matchup where Cincinnati took San Francisco to the brink before the Giants won the last three at the Great American Ballpark? The Giants proceeded to tear through the Cardinals and Tigers, who put up less and less competition. That first round matchup turned out to be the toughest test for the 2012 Giants on their way to the Series.

Next: a comparison of the two leagues and across all the stats.