So, the elephant in the room. It's January 19th. 2013. Almost three weeks into the new year and I begin to write about baseball? I believe in digesting information before looking at narratives and broader trends, but this seems a little extreme. While we are in the thick of the NFL playoffs and the college basketball season, I thought I should at least get some of my baseball findings on paper.

I am one of those baseball fans that only really pays attention to MLB after the All-Star break. It's a long season (too long), and it's too hard to follow so many games. But after the All-Star break, usually the chaff has been purged leaving a few teams in each division with a shot at the post-season. To me it is infinitely more fascinating to analyze these teams than focus on meaningless games in early July involving clubs like the Blue Jays, Twins, Mariners, etc. Only problem: watching after the Olympics made me wonder which teams I should be paying attention to, so I put together some research to inform my viewing/thinking. Some of this research proved to be quite fascinating: 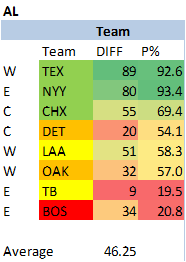 Here we are! Tomorrow's games decide which teams will compete in the Super Bowl, and if they are anything like last weekend's matches, we are in for a good weekend of football. What the games may not decide, however, are which teams deserve to be in the Super Bowl. Luck is part of the playoff equation, and every year, there are teams that either fail to take advantage of it or fail to create it by not going for any plays that would require some luck. Sometimes, a team like the Denver Broncos will turn super conservative on offense and fail to create any plays where luck can manifest itself in the form of a pass interference call or a blown coverage in the secondary. On the other side, the Ravens went balls to the wall and caught some favorable luck to a shocking win.

When picking games, we, like the teams themselves, are at the mercy of a certain amount of luck. The Denver loss, along with some other picks (taking the Pack as an emotional hedge) led to a 1-3 record. After going 2-2 during the wildcard round, what makes me have any conviction in a 3-5 playoff picking record?

I caught a cold on Thursday that is proving very stubborn, so this will be a short post. Without ado:

Bill Barnwell at Grantland did a good job explaining why this game may not be very similar to the Broncos 34-13 thrashing of the Ravens a few weeks ago. While I agree that it shouldn't be this close, they key when watching the game was that Denver dominated in the trenches. I know Baltimore has some guys back, and their defensive line was living in the Colts' backfield, but I believe Denver is playing at a very high level and the rest will help. The week after the Ravens win, the Broncos were able to put up 34 on at decent Browns defense; no thinking they should score less than 30 this time. The Baltimore offense will likely be better (Flacco's pick-11 was one of the worst throws in the world), but not enough to catch up. The line actually moved from Denver +9.5, which I can see given the big spread, but I'd take it. One final note: the high for tomorrow in Denver is 17 degrees F, which makes me slightly nervous about Peyton, but the Ravens have to adjust to that and the altitude, and Denver showed no signs of stopping in their last few cold home games.

That wasn't much of a game. Despite my sneaky suspicion that Alabama would win handily, I at least expected Notre Dame to keep it respectable through a quarter or two, before trading FGs for TDs led to too deep a whole to climb out of against a good Alabama defense. And while I was right on about several points (namely Eddie Lacy, the Tide offensive line), I didn't expect the dominant performance they achieved on the nation's biggest stage.

Email ThisBlogThis!Share to TwitterShare to FacebookShare to Pinterest
Labels: NCAAF

NCAAF 2013 National Title Game Pick:
To be honest, I'm rooting for Notre Dame. I think the SEC is on a low year with some notable losses in the postseason, and while I'd love to witness a dynasty, I'm hoping for something new. And there is so much good karma about this Notre Dame Fighting Irish team. First, Manti Te'o and the amazing person he has shown us to be. I don't think he deserved the Heisman (see below), but he deserved all the hype. Second, this Notre Dame team was the first football team to be ranked No. 1 in the country in the BCS and polls, as well as academically by graduation rate. This deserves recognition as ND is a quality school. Of course the NCAA didn't publicize this, but the school did (I found this info courtesy of ESPN's TMQ).

But despite all the positives going for this team, including its dynamic receivers, improving quarterback, and great defense, I have a feeling ND is going to have trouble for the following reasons:

Email ThisBlogThis!Share to TwitterShare to FacebookShare to Pinterest
Labels: NCAAF

Follow me @xingtheli for tweets throughout the NFL playoffs!
Posted by Unknown at 5:13 PM No comments:

While the Cincy-Houston game is at half (no idea what the Texans are doing, showing no faith in Schaub, everything is conservative, though it helps my Bengals cover pick), I decided to update my regular season post-view. Yeah, a little late, but better than never! It certainly was a season to remember, with remarkable comebacks, incredibly blown leads, some truly memorable moments, new players that shone, and old players that took the league to another level. There were a lot of surprises this season, both positive (Denver, Minnesota), and negative (Philadelphia, New Orleans, both New York teams). Before we get too far into the playoffs, lets see how see got here.

A great NFL season is wrapping up, and I will post more on the regular season later. First, I wanted to get my Wildcard picks in before the lines moved too much. Like Simmons, I'll be picking against the spread and home teams are in caps.

Watching the highly entertaining Clemson / LSU (go tigers?) match in the Chik-fil-A bowl on New Year's Eve, I pulled for Clemson to make it a game in the 4th quarter. And make it they did, with a sweet offensive series, including a nice hook and lateral. The LSU pass rush just wasn't enough at the end, though LSU fans should and have blamed the offense for a total lack of rhythm.

But there was one play near the end that made me cringe. After a nice hook and lateral got them into scoring range (a long aside: I thought this was called ~20 yards too early; I feel you need to score on these plays and with the difficulty of scoring in the red zone anyway, I think this is a play that should have been saved for the 25 yard line, but worked anyway), Tajh Boyd threw a bullet into the end zone to being Clemson within 2. Then the offense set for a conversion, and I knew something was amiss.