Malcolm Brogdon was selected in the 2nd round of the 2016 NBA draft, the 36th pick overall.

That shouldn't matter to this story, but it does. He came from a good basketball program at the University of Virginia, but one that hadn't really made a splash on the national scene. Before Virginia, he was a lightly recruited player from Georgia who never starred but got better every year in high school. His college trajectory would be the same—his minutes climbed up steadily each year, all the way to 33.9 per game his senior year.

Oh yeah, he stayed in school and graduated from one of the nation's best public schools, in four years. For 99.9% of Americans, that would be a laudable achievement. For someone trying to make it i the NBA, his diploma was a scarlet letter.

If you haven't noticed, I'm now covering competitive League of Legends for Dot Esports. It's a great platform with great fellow writers and editors. Head over for a visit!
Posted by Unknown at 12:20 PM 11 comments: 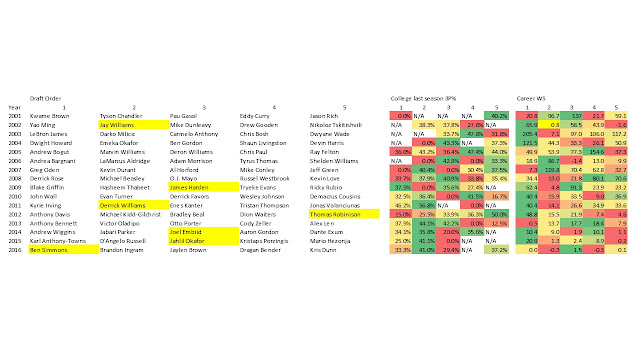 How the Warriors called the Cavs' buff and solved their offense

The most iconic moment of the 2016 NBA Finals was the play that won it: Kyrie Irving hitting a three while guarded by Stephen Curry.

It was the rarest of shots, two superstars both involved in the game-winning play. This was no Michael Jordan vs. Bryon Russell. This was A superstar hitting a shot over an MVP. The problem for the Warriors, who lost to the play? Curry should never have been involved.

All series, Klay Thompson had been the designated defender on Irving, tasked with using his foot speed and size to contain Irving, a transcendent scorer. But Cleveland used a trick they had all series to get the matchup they wanted. Over the past few years, Golden State has become known for a defense that defuses pick-and-roll plays by switching the play.

Switching has become the Warriors' core identity on defense. Led be perennial Defensive Player of the Year contender Draymond Green, the Warriors trot out a lineup full of like-sized players, all with the length to switch nearly any matchup. Nearly.

The one player they don't want switching is Curry. His slight frame doesn't allow him to contest in the same way as Thompson, Green, and the other Warriors. That's why Curry is the exact player Cleveland wanted. Cleveland's plan was to use the Warriors' switching to beat them. Switching is consistent, but also predictable. By understanding the rules by which Golden State's defense is built on, Cleveland could force a switch in the middle of the floor, where no other Warrior could influence the play. The figured out how to get Curry switched onto Irving, LeBron James, or another dangerous scorer.

So when J.R. Smith set a screen for Irving, they knew they'd get Curry, Smith's original defender, on the switch. The rest was history.


After the Finals, the Warriors made a few moves that improved their team. After another romp through the regular season and dominating the first three rounds of the playoffs, the Warriors were expected to win the rubber match. 538's pregame pre-series predictions had the Warriors winning at over 90 percent.

What the hell is wrong with Liquid? The upstart bunch that were so close to going to the Spring Playoff Finals have struggled through an inconsistent split of monster plays followed by careless throws. Their most recent embarrassment was a 2-1 loss to Apex, a non-playoff team. Let's take a look at what exactly is going on.


In a desperate bid to make playoffs, Apex had to go 2-0 against playoff teams Liquid and CLG to make it, while hoping Envy stubbed their toe. Liquid on the other hand still had pride and playoff positioning to play for. They can't throw these games away.

Announcement: I am now writing for Blog of Legends!

The past year has been an incredible journey producing League of Legends content for this blog. However, I can't deny that this platform is minuscule compared to those offered by sites like Blog of Legends and The Rift Herald.

You may have noticed that I produced some content for the Rift Herald during MSI. Over the last few weeks, I have transitioned into a writing role with Blog of Legends to provide weekly previews and recaps of key NALCS matchups.

A lot of the analysis that was posted to this site will be moved there. The pieces will not be as in-depth due to length requirements, but they will still give you a thorough understanding of what happened during the games and why the winning side achieved victory.

I may continue to post other League-related material to this site, and will definitely keep track of the other major sports here. But for LCS-specific analysis, please visit the sites linked above. See you on the Rift!

I know I write a lot about Immortals - I watch all the LCS matches, but with the amount of games going on, I've chosen to focus my coverage on the top of the split. And IMT are going through several games against playoff competition, TL being one of them. I love this matchup. I love the good-natured trash talk between Reignover and Dardoch. I haven’t spoken to them personally, but I get the feeling that the talk is more for the camera and fans than any real bad blood – they have great camaraderie after the games and I feel like there’s tremendous respect between the two.


Picks and Bans – Liquid's draft suits their players well. Dardoch and Fenix are consistent damage dealers, Fabbbyyy provides utility and engage, while Lourlo plays tank Shen. The question is whether Lourlo will be good enough on his TP and ult to make an impact around the map – his TP play is extremely inconsistent and I’m not 100% certain the two globals will help. IMT picked a comp focused on late-game GP and Sivir, with a ton of utility and zoning from other places. If they get ahead, the siege could be scary.

Cloud 9 Gaming and Immortals come into this featured Week 5 matchup from different places. C9 just stumbled against Liquid as TL read their team perfectly and wisely chose to camp midlane. Sneaky is a god-tier ADC but in this meta, it takes a while for ADCs to get going and Impact and Meteos just aren’t consistently affecting the rest of the map. Jensen in particular tweeted frustration with his team’s effort, normal for eSports, but not something you’d hear from a professional in most other major sports leagues. IMT have continued to roll with a wider champion pool and more from Pobelter than they saw in the Spring Split. If they can keep up in the mid lane while continuing to pressure the sides in classic IMT fashion, this could be another IMT win. For C9, they really need to attack the solo lanes and have Meteos be in the right places.


Picks and Bans – IMT target support with their bans while C9 target the midlane. Both are fine strats - C9 have been rotating Bunny in/out with Smoothie, it's smart to play with that matchup. Pobelter has had carry performances, but I don't know his champion pool is quite as large as Jensen's. I like Karma with Jhin for IMT with Rumble top and Zyra at support – they should be able to do well in each lane and give Pobelter a lot of jungle support. C9 throw everything into Sneaky and Jensen with lots of engage/disengage with Thresh/Trundle/Gragas around Sivir/TF. They also have very strong wave clear and multiple positions, critical against IMT.

TSM are straight rolling this split, with Biogod Biofrost providing much needed game sense and synergy with Doublelift. Everyone has found his role, Svenskeren is effectively getting leads for his carries, and everyone is teamfighting well around Bjergsen and Double. I still think that a split push style, a la CLG, can potentially cause them problems, but honestly, I don't know if anyone outside Immortals has the horses to compete. NV have a big task ahead of them in this matchup, but these are the games they need to prove they belong in the upper half of the standings.


Picks and Bans – NV start well getting Trundle and Ezreal, but then mysteriously finish thing off with a Varus, which basically gives Bjergsen a huge pressure advantage on Zilean. They have a strong pick comp, but I’m not sure how that works with Trundle – I think you’d rather have double TP and try to play a split push game. I can see the fear of them not being able to split against TSM’s superior coordination, but I don’t know if Varus is the answer. TSM have so much speed with Karma and Zilean and Sivir and double TP, I just don’t see NV playing their comp effectively. Braum/Ezreal will eventually be good against Karma/Sivir, but can they get to the late game?

While CLG have stumbled out of the gates, IMT have continued their strong, dive-focused play. They still have the best lane management in NA (all respect to TSM), and they have the tools to punish CLG where it hurts - the midlane matchup between Pobelter and Huhi is key to this entire series.


Early Game – IMT win the early game via strong control around TF in mid, which is a bit unexpected given their playstyle and comp. But that attention has a cost – Huni is far behind Darshan, and CLG played those fights close to even. A strong rotation at 12 minutes nets them a kill lead and a plus KDA on Darshan’s Jax, which is already becoming a problem. IMT like to pressure all waves and one way to get them out of that pattern is to group faster than they can (and before losing a turret). They continue roaming around the map, getting a gold lead and summoner after summoner from IMT. That gives CLG the mid outer at 22:30.